I came across a statement saying how it would be a good thing to ‘gamify social learning‘, or words to that effect. I’d like to unpack that short statement. What does ‘gamify’ really mean? It could mean that people can be more engaged while playing games and therefore could learn while playing. Star Trek fans may think of the holodeck as the ultimate game-based learning platform.  I have spent a fair bit of time working with flight simulators and can attest to the value of simulation and emulation when it comes to learning how to fly aircraft. There is also significant research to show how epistemic games can be used for learning.

David Williamson Shaffer’s book, How Computer Games Help Children Learn, is mostly about epistemic games, or “games that are fundamentally about learning to think in innovative ways”. He begins the book by showing the fundamental weaknesses of our Industrial School System, another game:

“Not surprisingly, the epistemology of School is the epistemology of the Industrial Revolution – of creating wealth through mass production of standardized goods. School is a game about thinking like a factory worker. It is a game with an epistemology of right and wrong answers in which Students are supposed to follow instructions, whether they make sense in the moment or not. Truth is whatever the teacher says is the right answer, and actions are justified based on appeal to authority. School is a game in which what it means to know something is to be able to answer specific kinds of questions on specific kinds of tests.”

Shaffer shows the need for teaching how to think and how to be creative, instead of how to memorize, and lays the argument for the use of games in learning. Most of his examples are outside of the classroom because it is obvious that these kinds of epistemic games would disrupt classes and learning management. The games that are discussed are called monument games, or exemplars of good practice. The ideas and concepts presented are critical for anyone who wants to use games in learning, not just playing bingo and using words or figures out of context. The latter does not help learning. That’s a different sort of ‘gamification’.

The major problem with the ‘gamification’ of professional learning is that work is already a game. It is an artificial construct that society has created, and many of us have to play. Adding badges, or other extrinsic motivators, to professional learning only detracts from the real game. It also creates incentives that, when removed, may result in going back to previous behaviours.

So yes, good games, and especially epistemic games, can help people learn. The military has engaged in simulated exercises for millennia. However, adding a game layer to our work does nothing more than take us away from our work. As Dan Pink showed in his book, Drive: rewards, consequences and motivation at work, much of what we have taken for granted about work is just not supported by the research. Extrinsic rewards [gamification] only work for simple physical tasks and increased monetary rewards can actually be detrimental to performance, especially with knowledge work.

The keys to motivation at work are for each person to have a sense of Autonomy, Mastery and Sense of Purpose, as shown in this video. Pink’s work is based on the original research that developed self-determination theory, which states that relatedness — the universal want to interact, be connected to, and experience caring for others — is a primary psychological need, instead of a sense of purpose.

Where the ‘gamification’ movement could focus its efforts is on epistemic games, simulations, and meaningful contextual practice, not badges or making points. 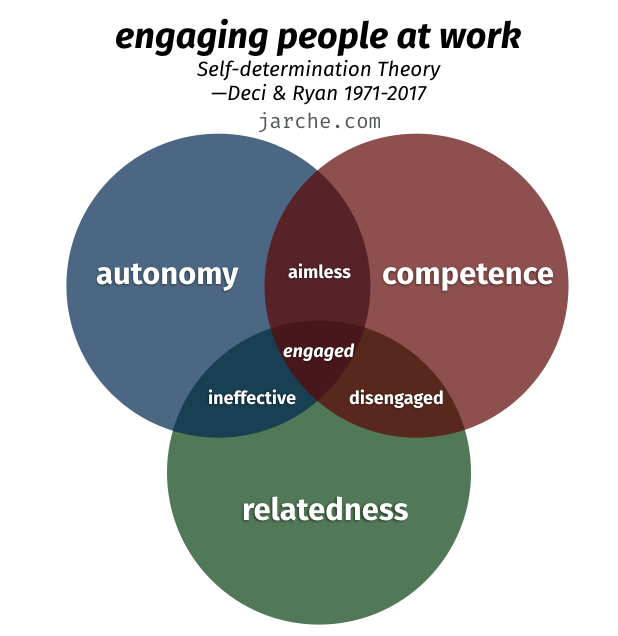 18 Responses to “Work is already a game”

Leave a Reply to Doug Belshaw