Today, it’s all about networks, something you were most likely not taught about in school. This means that most of our education is useless in understanding the world as it currently exists. Yes, useless.

If you were raised during the past several decades you probably understand tribes and institutions. You likely heard a lot about market forces, especially in 2008. But that is a triform society. What happens as we become a quadriform society (Tribes +Institutions +Markets +Networks)?

There are some interesting things that happen when hyperlinks subvert hierarchy, as the writers of the Cluetrain Manifesto said in 1999 (that long ago). For example, United Breaks Guitars, a video that gave a whack on the side of the head to United Airlines, adversely affected United’s stock price. Wikileaks published some documents and enormous state resources were put against one person, now holed up in an embassy, at significance expense to those who pay the guards. Arab Spring became a force overnight, confusing intelligence agencies (the same ones who never saw the collapse of the Soviet bloc in advance). The Occupy movement came and some say has gone, but it’s likely a field test for more movements to come.

In education, the current subversion is called a MOOC, which has already been subverted by corporate interests, but will likely rise again in another name or form. In the labour movement we are seeing things like alt-labour as well as a growing shareable economy. CSA’s are becoming the norm. Networked, distributed businesses, like AirBNB, are disrupting existing models, with the inevitable push-back as they become successful.

Big data is also networked data. Data is the new oil, according to Gerd Leonhard. While my personal data may not be that important in the great scheme of things, networked data drive advertising, brands, and security systems. To negotiate the network era we need to understand networks – social networks, business networks, government networks, and information networks. We need network fluency.

Tony Reeves wrote a recent post about the 21st century skill set, showing that global fluency could be developed through certain skills like critical thinking, in addition to some key literacies, like information literacy. I have taken these ideas but describe them slightly differently, as shown in the image below. 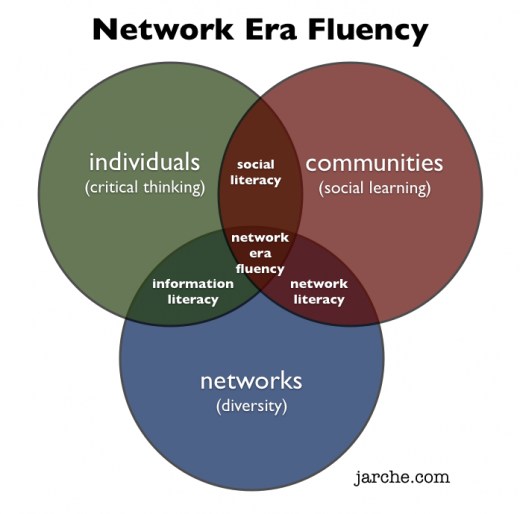 Network era fluency could be described as individuals and communities understanding and being part of global networks that influence various aspects of our lives. For individuals, the core skill is critical thinking, or questioning all assumptions, including one’s own. People can learn though their various communities and develop social literacy. Information literacy is improved by connecting to a diversity of networks. But control of networks by any single source destroys the ability for people and communities to develop real network era fluency, which is not good for society in the long run and may kill innovation and our collective ability to adapt.

Mass network era fluency can ensure that networks remain social, diverse, and reflect many communities. This kind of fluency, by the majority of people, is necessary to deal with the many complex issues facing humanity. We cannot deal with complex issues and  networked forces unless we can knowledgeably talk about them. This requires fluency.

Related: The Network is the Solution

Leave a Reply to Julian Stodd