“Cisco’s view is that IoE technically differs from the Internet of Things; IoT is composed of connected objects, while IoE encompasses the networks that must support all the data these objects generate and transmit. “Software by itself won’t get the job done,” Chambers said at Interop in October, arguing that IoE demands data center software and hardware that work in concert.” – Information Week

Better than a single human brain are many human brains cooperating and collaborating in social networks. Perhaps even better would be networked humans combined with networked technology – the Internet of Everything. So for the IoE to be successful, people will be the deciding factor. The 2014 PEW Internet Project report covers a wide variety of perspectives on the potential changes we may see.

The scarce resource will continue to be human attention. There is a limit to the usefulness of devices that are worn in public but that demand attention because it is often socially and practically unacceptable to give those devices enough attention to make them worth the trouble of configuring and interacting with. – Karl Fogel, Open Tech Strategies

We aren’t evolved enough as a species or society to create apps and services that are useful to humanity in the Internet of Things. We’ll try to create efficiencies but be thwarted by Nature’s complexity. False positives from contextual movements will break people’s willingness to have devices track their expressions and thoughts. – Jerry Michalski, Relationship Economy eXpedition

Our deep desires to be entertained and connected will lead us to accept these devices. Younger folks will lead the way. Our will to create will make us want these devices ready and on-hand. – Bryan Alexander, National Institute for Technology in Liberal Education

Beth Kanter commented to me that, “the first phase of the web was about documents and conversations. We are entering into the next phase which data are the connective tissue between those things. Data literacy skills are important!” Data literacy is showing people that they have access to the most powerful communications medium in history and that individuals have to grab hold of it, understand it and use it for the good of society, because we are society. Data literacy is not about doing a job better. It’s understanding what it means to work, to create, and to be responsible, all within the context of being visible to everyone else. Data literacy means growing up, fast.

Data literacy is the way in which we connect with information, build knowledge, gain trust and strive for credibility in the network era. I have summarized 34 ways to approach sense-making and knowledge-sharing, given our current technologies. With the Internet of Everything, it is likely we will need to develop more and better ways to do so.

Data literacy could be seen as part of a new network era fluency – individuals and communities contributing to global networks that influence various aspects of their lives. For individuals, the core skill is critical thinking, or questioning all assumptions, including one’s own. People can learn through their various communities and develop better social literacy. Data literacy is improved by connecting to a diversity of networks. Mass network era fluency can ensure that networks remain social, diverse, and reflect many communities. This kind of fluency, by the majority of people, will be needed as people are outnumbered by devices on the Internet. People cannot deal with the arising complexity of the Internet of Everything unless they can knowledgeably talk about it. This requires fluency by an educated and informed citizenry. 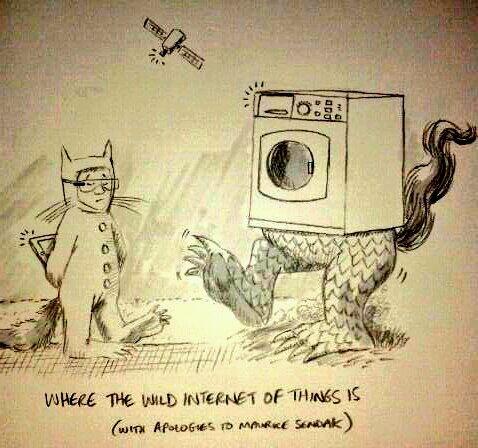 This post is brought to you by InnovateThink and Cisco.

I retained all editorial control.

9 Responses to “People and the Wild Internet of Everything”

Leave a Reply to Harold