Nesta, a UK-based innovation charity, recently looked at jobs and automation, in the article, Creativity versus Robots. I have summarized some of their findings, and added my own perspective, with an image showing how standardized work is decreasing while creative work is increasing in the job market. Overall, we are seeing an increasing percentage of creative jobs in the workforce. But this is not a zero-sum game, as many jobs are getting automated and disappearing. If nothing is done, there will be severe societal repercussions. 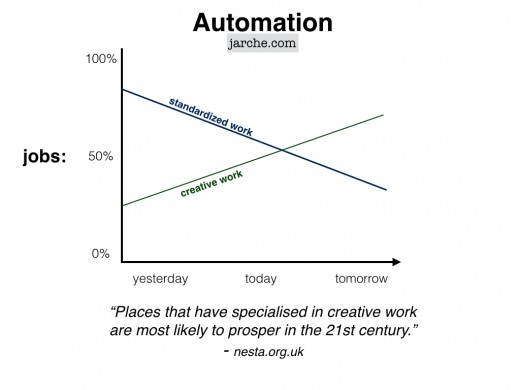 Nesta cites US and UK data on jobs, indicating a near future of more automation, as well as uncertainty for about a third of current jobs. 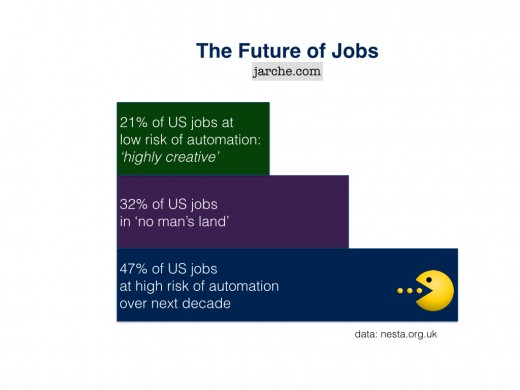 It is no longer a question of whether standardized work will be automated, but when. In an era of increasingly complex challenges, such as climate change, today’s workforce has to deal with more complexity and even chaos. We need to skill-up jobs for emergent and novel practices which requires a completely different mindset about work.

Those workers whose jobs are getting automated need not just skills, but opportunities to do more creative work. In addition, we cannot leave behind the one-third of workers in no-man’s land. In the USA today, 79% of the labour force needs to shift to highly creative work. Jobs, as currently defined, are not the answer. We need to develop structures that encourage and value creative work, from our education establishments, unions, employers, and politicians.

No society can afford to leave over three quarters of the workforce behind as it shifts to a creative economy.  Gary Hamel has described traditional (industrial) employee traits of Intellect, Diligence & Obedience as commodities (ripe for automation). A creative economy requires independent and interdependent workers (more like theatre productions) with traits that cannot be commoditized: Initiative, Creativity, Passion.

The job is nothing more than a social construct. I think it’s outlived its usefulness. The construct of the job, with its defined skills, effort, responsibilities, and working conditions, is a key limiting organizational factor for a creative economy.

To realize the creative potential of individuals we have to cast off old notions of how work gets done. There is no such thing as a generic  job description into which we just drop some “qualified” candidate. Job competencies are a myth. People are individuals. The role of an effective HR department would be to know each person individually. Everyone can be creative, including janitors. We need to understand this as automation replaces people, but may leave nobody in place to do the creative human aspects of work.

And yet, when some psychologists interviewed hospital janitors to get a sense of what they thought their jobs were like, they encountered Mike, who told them about how he stopped mopping the floor because Mr. Jones was out of his bed getting a little exercise, trying to build up his strength, walking slowly up and down the hall. And Charlene told them about how she ignored her supervisor’s admonition and didn’t vacuum the visitor’s lounge because there were some family members who were there all day, every day who, at this moment, happened to be taking a nap. And then there was Luke, who washed the floor in a comatose young man’s room twice because the man’s father, who had been keeping a vigil for six months, didn’t see Luke do it the first time, and his father was angry. And behavior like this from janitors, from technicians, from nurses and, if we’re lucky now and then, from doctors, doesn’t just make people feel a little better, it actually improves the quality of patient care and enables hospitals to run well. – Barry Schwartz

Understanding and incorporating humanity back into our workplaces will liberate us from the scientific management models that inform too many of our organizations. One small change, that could have a major impact, would be to look at everyone’s work from the perspective of standardized versus creative work. Every person in the company, with the help of some data and peer feedback, should be able to determine what percentage of their time is spent on standardized work. If the percentage is over a certain threshold, say 50%, then it becomes a management task to change that person’s job and add more creative work. The company should be constantly looking at ways to automate any standardized work, in order to stay ahead of technology, the market, and the competition. While automation may be inevitable, it does not have to destroy the workforce.

Looking at the overall company balance between standardized and creative work should be an indicator of its potential to succeed. By visualizing the split, people in the company can make plans and take action. In this environment, jobs will have to become more flexible and open to change. Jobs of the 21st century may look nothing like the structured one-size-fits-all jobs of the 20th century.

Building ways to constantly change roles will be one way to get rid of the standardized job, which has no place in a creative economy. This small change could have a major impact on any organization. It requires a new way of looking at work, and then collecting good data, engaging workers in the process, and being transparent. Most of all, a creative workplace requires managers who really care about creative talent development.

2 Responses to “An update on jobs”