I have often discussed the automation of work here and how we need to focus our development and education efforts on human competencies that cannot be done by software or machines. But is automation really the major cause of workplace disruption? For example, in Sweden automation is welcomed by workers who have state support systems for unemployment and retraining. But these supports are not available in many developed countries like Canada or the USA.

In previous technological shifts, such as one hundred years ago when agrarian field workers left for factory jobs in the city, more jobs were created. Today we do not see that, as is evidenced by the growing number of freelancers and people cobbling together several part-time jobs in order to make a living. In addition, many new jobs do not have pension plans and trade unions have lost much of their influence.

Combine automation with our current version of financial capitalism and you get a perfect storm. When a bank plans on reducing its workforce from 50,000 to 500 you know that they care not a whit for people. In 2016 43% of senior executives had the “robotic automation of processes” as a high priority over the next two years. 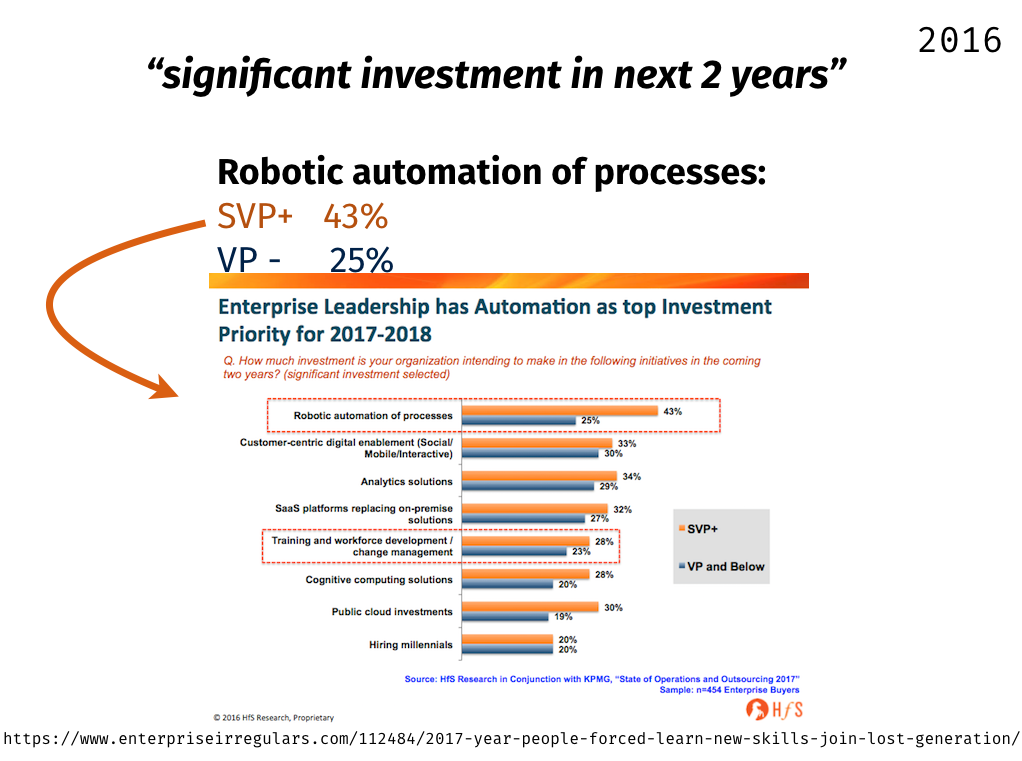 Much of the current analysis of the automation of work looks at replacing what people do with equal work done by machines. But the machines do not even have to be as good as a person, due to our bookkeeping systems that treat labour and capital differently. Labour is a cost while capital is an investment.

“Thanks to accounting conventions and tax laws dating back centuries, a robot doesn’t need to be better – or more efficient – than a human being at a task to make a business more profitable. It just needs to be 34% as good, or 11% as good, depending on that business’s accounting and amortization policies.” —Hatcher Blog

Our bookkeeping practices and capitalist systems are the main culprits in edging out human labour in favour of technological capital. As difficult as it has been to earn a decent wage, in spite of rising productivity for the past several decades, it will get even tougher under the current circumstances. And it is not due to a ‘skills gap‘.

“In other words, the problem is not that Capital lacks a say in education, but that corporations and the 0.1% are reaping all the rewards and need to explain why. Too often, this explanation comes in the form of the zombie idea of a ‘skills gap’, which persists though it keeps being debunked. What else are CEOs going to say – and the skills gap is almost always based on an opinion survey – when they are asked to explain stagnating wages?” —A Field Guide to Jobs that Don’t Exist

Many of our assumptions, such as the need for governments to create new jobs, are wrong. We need to rethink the nature of the economy, work, jobs, employment, accounting, taxation, and pretty well everything else from the last century. The Network Economy, and the digitization of communication, needs new models.

While we need to focus on developing those human skills that cannot be done by machines, we also need to build new structures in which to do this work. This is why digital transformation of existing companies will not result in net societal benefits. It will only enable these companies to continue to downsize and invest more into software and machines.

Today, it is the knowledge workers of the world who own the means of production. But most companies and labour laws are structured around an industrial model of capital and labour. The innovation that will save human work will be new business and operating models. The people formerly known as the middle class have the unique opportunity to become the people who will make work more human — if they work together.

One Response to “automation + capitalism = a perfect storm”