“The mass societies had many more decisions to make, and no way of making them in the old, egalitarian way. Their huge numbers made any attempt at discussing the question as equals impossible, so the only ones that survived and flourished were the ones that became brutal hierarchies. Tyranny was the solution to what was essentially a communications problem.

Fast forward ten thousand years, and give these societies mass communications. You don’t have to wait for Facebook; just invent the printing press. Wait a couple of hundred years while literacy spreads, and presto! We can all talk to one another again, after a fashion, and the democratic revolutions begin. We didn’t invent the principle of equality among human beings; we just reclaimed it.” —Gwynne Dyer

However, artificial intelligence may soon swing the pendulum in the opposite direction. AI makes it possible to process enormous amounts of information centrally. In fact, it might make centralized systems far more efficient than diffuse systems, because machine learning works better when the machine has more information to analyze. If you disregard all privacy concerns and concentrate all the information relating to a billion people in one database, you’ll wind up with much better algorithms than if you respect individual privacy and have in your database only partial information on a million people. An authoritarian government that orders all its citizens to have their DNA sequenced and to share their medical data with some central authority would gain an immense advantage in genetics and medical research over societies in which medical data are strictly private. The main handicap of authoritarian regimes in the 20th century—the desire to concentrate all information and power in one place—may become their decisive advantage in the 21st century.” —Yuval Noah Harari

What we can do

1. Understand ourselves. The real actionable insight from Harari is that to make any progress collectively we must know our own selves first. For educators, religious leaders, and politicians, this should be the main effort for the next few decades. We need to work cooperatively, but first we have to know who each of us is. We have to be much better at sense-making.

2. Connect our humanity and knowledge. Edward O. Wilson envisages a third enlightenment that will bring us closer to seeing humanity as one common group, with no concept of foreigners.

“Scientists and scholars in the humanities, working together, will, I believe serve as the leaders of a new philosophy, one that blends the best and most relevant from these two branches of learning.”

3. Put collective human oversight into all machine systems. As computers take over routine work we cannot turn a blind eye to how they make decisions. Not only do we have to focus on human work, we have to keep a careful eye on what the machines are doing, why they are doing it, and how they are making their decisions. 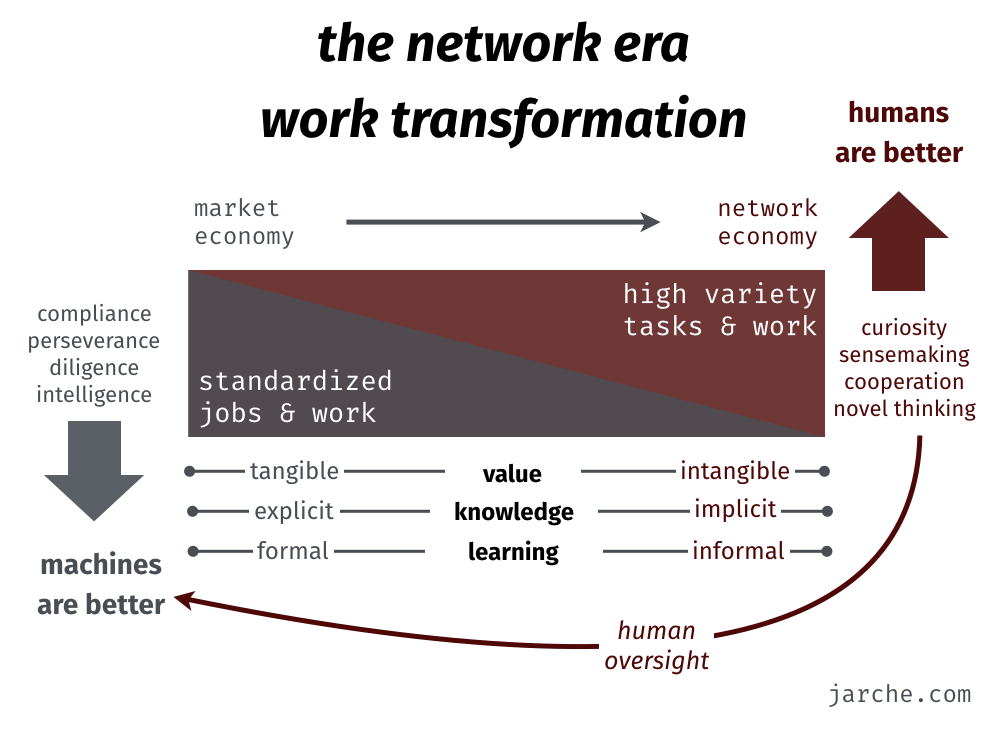