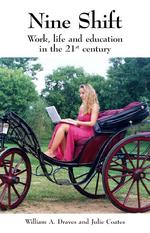 In 2004 Bill Draves and Julie Coates wrote Nineshift: Work, life and education in the 21st Century. That was the same year I started blogging here. Nineshift is based on the premise that there will be a major shift in how we spend 9 hours of each day.

“There are 24 hours in a day. We have no real discretion with roughly 12 of those hours. We need to eat, sleep, and do a few other necessary chores in order to maintain our existence. That hasn’t changed much through the centuries, so far.

That leaves approximately 12 hours a day where we, as individuals, do have some discretion. That includes work time, play time, and family time.

Of those 12 hours, about 75%, or 9 hours, will be spent totally differently a few years from now than they were spent just a few years ago. Not everything will change, but 75% of life is in the process of changing right now.”

The authors put forth that society will significantly shift what we do with those nine hours and this will be complete by 2020 — one year from now.

I have cited the Nineshift book and blog dozens of times here.  In 1998 I wrote my Master’s thesis on learning in the information technology workplace, using Marshall McLuhan’s keen observations to see how interconnected computers were changing how people learn at work. Nineshift took this to a deeper level so I was of course very interested. I had the opportunity to meet Bill Draves in 2009 and have since followed his thinking. He has pointed out some significant changes that are happening right before us.

“In the agrarian age of the 19th century, when schools meant one-room rural schoolhouses, teaching morality and morals and character was all important. That’s because society needed, and so demanded, good moral character.

But the teaching of morality and morals and character was not some vague philosophical concept like it is today. Some 100 years ago morals meant specific behaviors.

In the Industrial Age of the 20th century, you didn’t have to be of good moral character to work in the factory. But you did have to be responsible.  And so teachers in the 20th century schoolhouse and college taught (still teach) responsibility.   And by that teachers meant specific behaviors.

Those behaviors are now obsolete. They made sense in the factory … But not in the virtual office.” —Nineshift

If the need for creativity has made responsibility obsolete, then most of our organizational tools and measurements about work and productivity will have to change. Perhaps we can learn from the edges of the economy and society, where creativity seems to be in higher supply. Take for instance the hacker, defined as “one who enjoys the intellectual challenge of creatively overcoming or circumventing limitations”. Here is more from The Hacker Manifesto (1986):

Richard Stallman says hackers are much more than ‘crackers’ [security system breakers] as they are often typified in mainstream media.

“It is hard to write a simple definition of something as varied as hacking, but I think what these activities have in common is playfulness, cleverness, and exploration. Thus, hacking means exploring the limits of what is possible, in a spirit of playful cleverness. Activities that display playful cleverness have ‘hack value’.”

Playfulness, cleverness, and exploration constitute essential parts of creativity as well. Like hacking, creativity requires an ongoing commitment. We cannot merely take creative time; it has to be part of our working flow. David Williamson Shaffer says that we need to make space for conversations in order to be creative.

“Creativity is a conversation — a tension — between individuals working on individual problems and the professional communities they belong to.”

Practices like personal knowledge mastery and its potential for enhanced serendipity can give us the underlying structure to become better hackers and more creative. Behaviour change comes through small, but consistent, changes in practice. So how do you move from responsibility, to creativity, and potentially to innovation? Play, explore and converse. But first we need to build a space to practice.

Sometimes we don’t see major changes until they hit us. One example was the chautauqua (1874-1920)  — traveling entertainment & culture shows that crossed America — which are discussed in the book.

“In 1920, chautauqua, those great cultural and educational programs that traveled from rural small town to small town, bringing history, music, and entertainment to an agrarian society, had its largest attendance. Some 25 million people were said to have attended a chautauqua that year. The following year they folded, never to put up a chautauqua tent again.” —Nineshift

It’s fascinating to look back and see what is taken for granted at a certain point in time. In 1920, with millions of people going to chautauqua, you probably would have the majority of Americans not predicting their demise. Yet, one year later, chautauqua are finished. What are we taking for granted today?

I see most of the nine shifts are well underway, which is quite a good prediction for a 14 year-old book. Consider also that these shifts are based on the USA, not any other country. But the one shift that may not be making much progress is #6.

New Societal Infrastructures Evolve: Shift Six
“New societal infrastructures are built, so that the inequalities of wealth in society are adjusted to the benefit of both business and the middle class. A variety of win-win programs are created, including new privacy laws and Individual Learning Accounts.”

In this case, it seems that America has moved backward. Inequality remains a growing problem. Privacy laws are strong in the EU but not North America. In education, Orleans Parish school board has recently decided to make the entire school system charter school only. Were the authors a little too hopeful or will inequality be addressed by the new representatives entering the US Congress in 2019?

Inequality is a major issue facing many countries today, as we shift to a very different economy and form of society. Without Shift #6 — new societal infrastructures — the other 8 are pretty well meaningless for much of society. 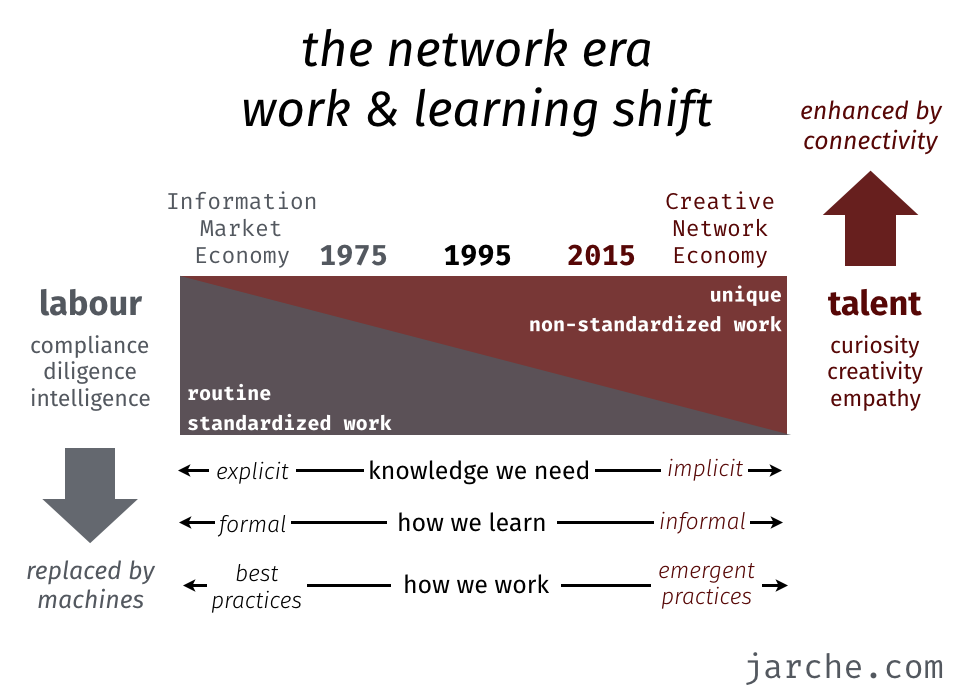 3 Responses to “nine shifts — one is critical”