What is leadership? In the past year I have written many posts on the subject from a variety of perspectives. Much of it is about ‘connected leadership’ — where people must be both teachers and learners. Neither training programs, nor even coaching, are enough.

Leadership by example through experience becomes the key. Connected leadership is more feminine, retrieving gender balance. It is not about individuals, but connected groups of people, especially engaged citizens. A networked society needs more universal mothers, not authoritative fathers.

We don’t need better leaders. We need organizations and structures that let all people cooperate and collaborate to get work done. Positional leadership is a master-servant, parent-child, teacher-student, employer-employee relationship. It puts too much power in the hands of individuals and blocks human networks from realizing their potential. Changing leaders will not change this type of  system from which they emerged. We need to change the system. 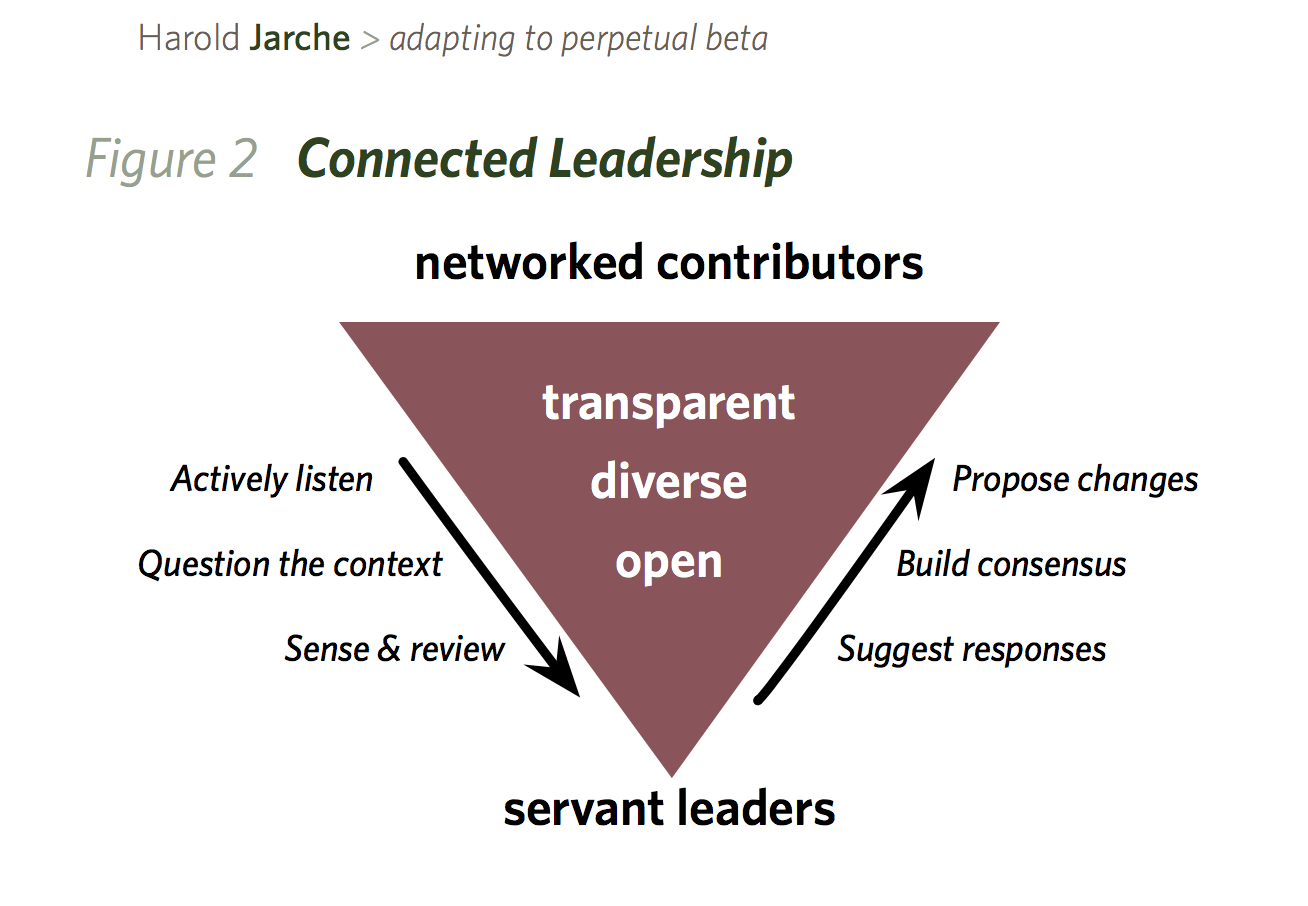 Our societies have grown from a collection of tribes, added institutions, and later developed markets. These aligned with revolutions in communications: from oral, to written, to print. The network era began with the advent of electric communications, though it is by no means completely established.

Each type of societal structure has required different types of leadership. One previous model of leadership that may be appropriate for our network era is Nordic leadership. Henrik Jeberg, author of Return of the Vikings, says, “It boils down to three things: mutual trust, openness, and low power distance.” Nordic leadership is servant leadership. It can be summed up as — inclusive, trusting, and collaborative.

Connected leadership is not taking it all. For example, Amazon may be a networked company but it is structured as a hierarchical institution in a traditional market. Founder and CEO Jeff Bezos makes $52,000,000 a day while workers in his warehouses earn less than $52 per day. This is not a networked model. It is extreme market capitalism. 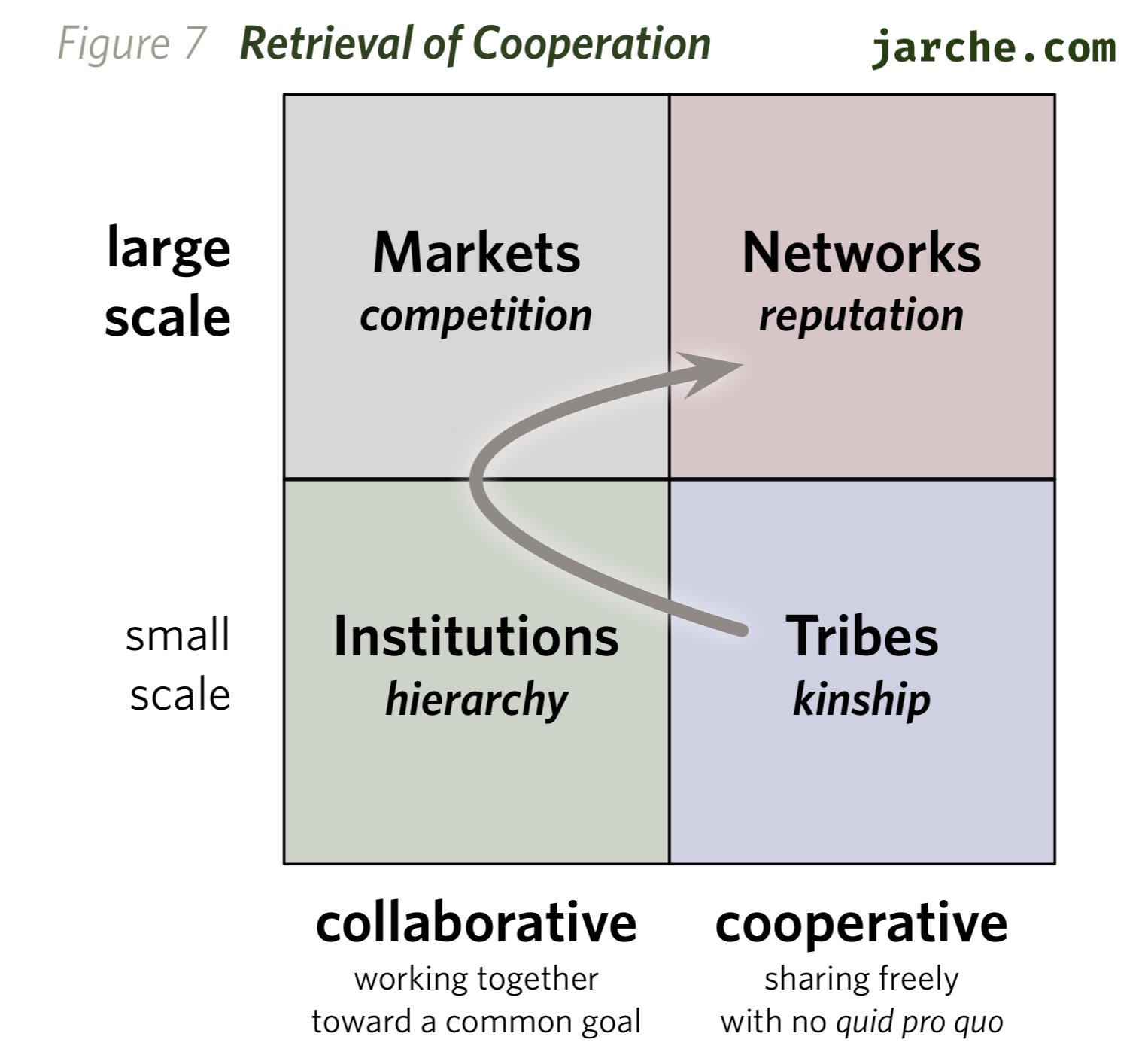 A better example is the Nokia Chairman who learned more in order to make his network smarter. Risto Siilasmaa tells how he learned about machine learning because everyone was talking about it but he still did not understand it enough to describe it.

“Then I dug into the most difficult part: how to explain the essence of machine learning in the simplest possible way, but without dumbing it down. I created the presentation I wish someone had given me. (The presentation is on YouTube, where, so far, it’s been watched by nearly 45,000 people. I’ve also given it to, among others, the full Finnish cabinet, many of the commissioners of the European Union, a group of United Nations ambassadors, and 200 teenage schoolgirls to get them interested in science. Many companies have made watching my introduction to machine learning mandatory for their management.)”

In networks, we have to move away from traditional metaphors of the ‘great man’ military theories of leadership and look for more fluid models, such as cycling, because — the best leaders are constant learners.

“Pelotons are able to operate in the way that they do because learning and experience is embedded within them. Young riders are mentored by seasoned professionals. They learn through imitation, trial and error, developing both instinct and intuition, daring to experiment when the occasion presents itself. The sport is all about life lessons acquired on the road, the knowledge gained from numerous failures as relevant as that acquired through the occasional success. Teamwork provides firm foundations. But autonomy within loose frameworks, decision-making and accountability are all encouraged from early on. It is this crucial combination — individual action contextualised in relation to the collective — that the modern corporation, government agency and charity now need to learn.” —Richard Martin

Leadership is helping the network make better decisions. Leadership has to focus on improving cooperation among all the nodes. This is the opposite of the ‘great man’ theory of leadership. It’s a networked humanity approach because our challenges are global. Our institutions and markets are now globally connected. Optimizing for any single institution or market to collaborate better is not enough. We have to find better ways for all of us to cooperate better. The good news is that we evolved to cooperate.

“network leadership is about working together to make sure that people in the network are connected in a way that encourages flows of resources, information and support to every part of the network” —June Holley

Margaret Wheatley states that, “Heroic leadership rests on the illusion that someone can be in control.” In a network society we don’t need heroes, we need learners. 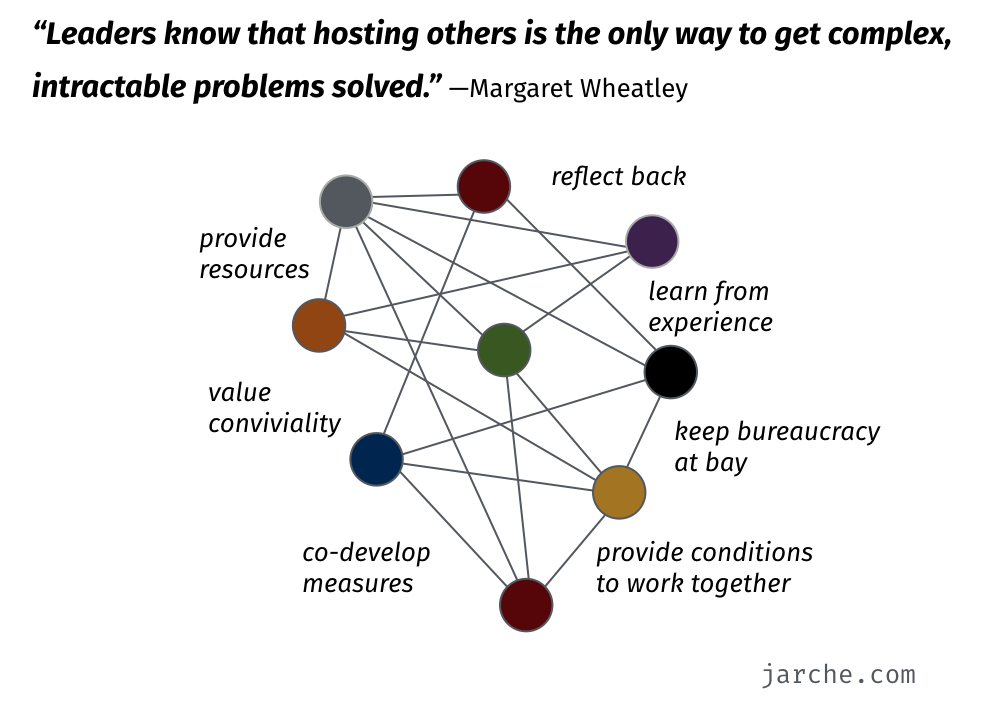 “Positive social change results mostly from connecting more deeply to the people around you than rising above them, from coordinated rather than solo action. Among the virtues that matter are those traditionally considered feminine rather than masculine, more nerd than jock: listening, respect, patience, negotiation, strategic planning, storytelling. But we like our lone and exceptional heroes, and the drama of violence and virtue of muscle, or at least that’s what we get, over and over, and in the course of getting them we don’t get much of a picture of how change happens and what our role in it might be, or how ordinary people matter. “Unhappy the land that needs heroes” is a line of Bertold Brecht’s I’ve gone to dozens of times, but now I’m more inclined to think, pity the land that thinks it needs a hero, or doesn’t know it has lots and what they look like.” —Rebecca Solnit — When the Hero is the Problem