In the HBR article Why Employees Don’t Share Knowledge with Each Other the authors find three main reasons [research paper behind a paywall]. First, people share knowledge when they are autonomously motivated, and not directed to do so, or pressured by peers. Second, cognitively demanding work is shared more frequently. Third, knowledge is shared best between equal peers and not with those who are dependent on the sharer. While this research was done with 394 Australian workers at various locations, as well as 195 Chinese workers at one company, it is reflective of older research — self-determination theory — conducted by Edward Deci and/or Richard Ryan from 1971 to 2018.

Deci and Ryan claim that there are three essential elements of the theory:

Competence
Seek to control the outcome and experience mastery
Relatedness
Will to interact, be connected to, and experience caring for others
Autonomy
Desire to be causal agents of one’s own life and act in harmony with one’s integrated self; however … this does not mean to be independent of others

In the case of these knowledge workers I would conclude that those engaged in cognitively demanding work had a high degree of competence. The researchers observed that those who were autonomously motivated shared their knowledge as well. But the third component — relatedness — is the key, it seems. Only if the workers could relate with people, as peers, would they freely share their knowledge. We need to consider this when we promote knowledge sharing in the workplace. Autonomy and competence are not enough. Neither is the ‘sense of purpose’ that Dan Pink promoted in his book Drive. Relatedness is often the missing component to organizational knowledge sharing. Even the researchers were surprised.

Much to our surprise, we found the opposite. When people perceived that others depended on them, they felt pressured into sharing knowledge (the controlled type of motivation), and this in turn promoted knowledge hiding.” —HBR 2019-07-19 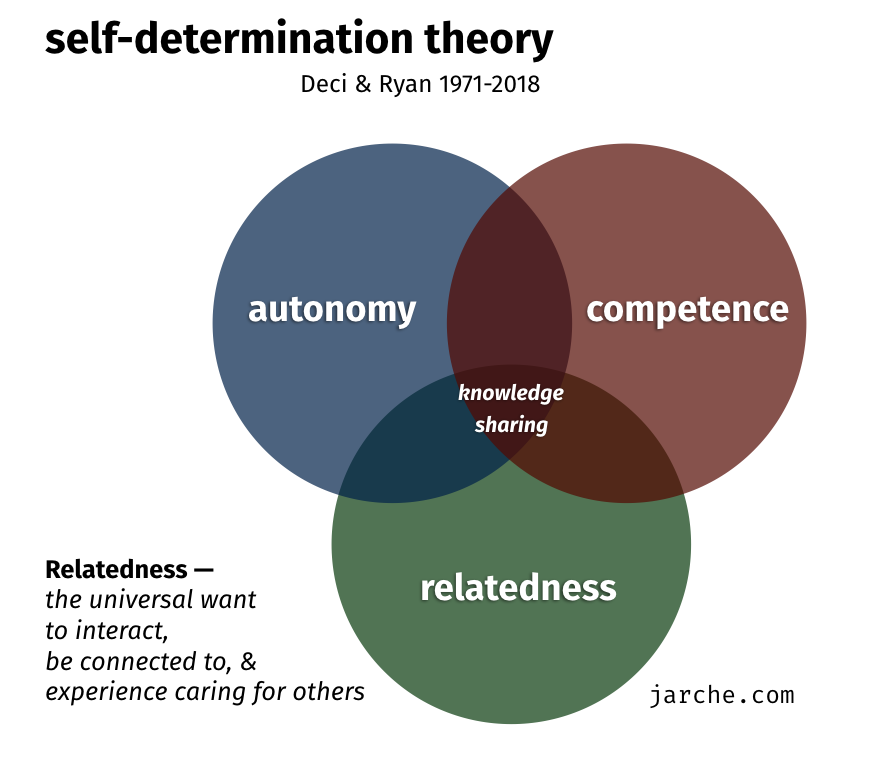