In working collaboratively & learning cooperatively I noted that team collaboration requires the transparent sharing of knowledge — using enterprise social networks and other technologies — so that everyone on a team knows what is going on and why. Decisions, and why they were made, are shared. New processes and methods are co-developed to create emergent practices. This method of work has to be supported by management by enabling — innovative and contextual methods, the self-selection of the most appropriate tools and work conditions, and willing cooperation between workers. 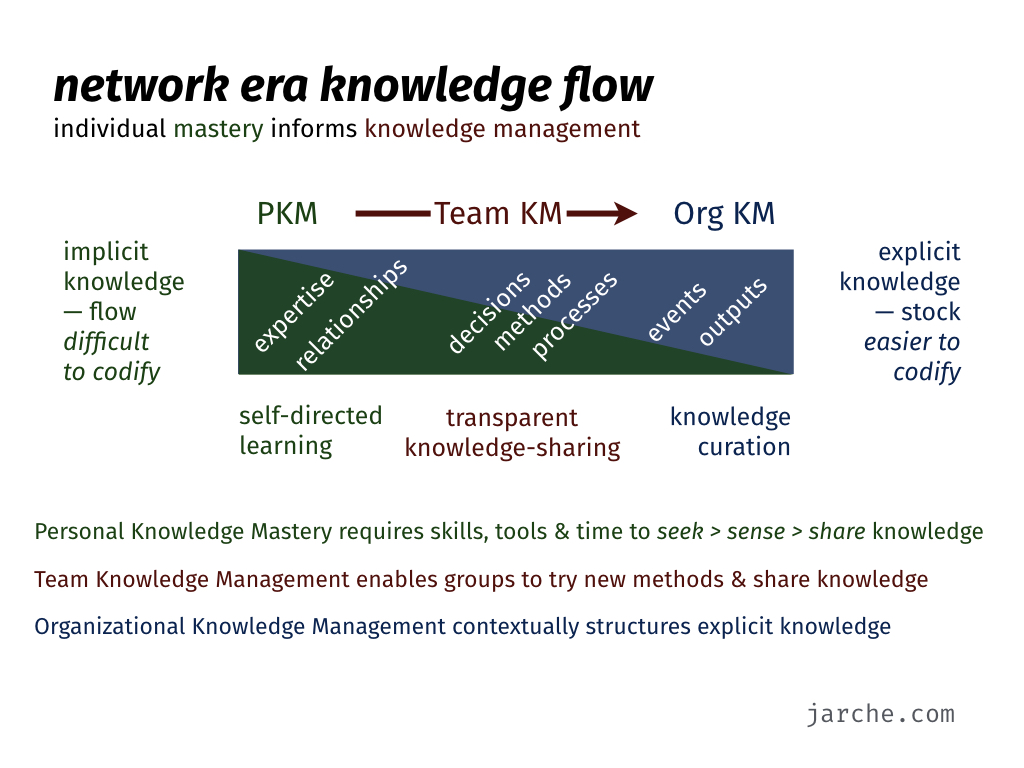 Recording decisions means not just noting why a decision was taken, but also why others were not. For example, I worked with a design chemistry department that was responsible for identifying potential new pharmaceutical compounds. They had extensive records on why certain molecules and compounds were selected for further research. They did not record why the other 90% were not selected. They had recently learned that a certain factor had not been understood or applied in their previous selections for further study over the past decade. Had they known why they had rejected molecules & compounds, they could have quickly identified potential live-saving drugs. But they had nowhere to start, other than examining all of the rejected cases. This shows why we have to explain not only why we have made a decision but the assumptions and limitations that rejected other options. We don’t know what we will need to know in the future.

Making explicit our methods and processes at the team level helps them to be shared across the enterprise. For instance, Curtis Ogden shares 25 behaviours that support network learning among educators.  These are great examples and I have seen or used several of them. It is suggested that, “Closing triangles means introducing people to one another, as opposed to networking for one’s own self, essentially a mesh or distributed structure rather than a hub-and-spoke structure.” This is good advice but what exactly does that mean at the team level of a given organization? This is where teams can add value, and giving examples of ‘closing triangles’ in context would help. Some people may feel they have nothing to add when it comes to knowledge management, but everyone can provide specific examples in the context of their work environment.

Another suggestion is to, “Think, learn, and work out loud, in the company of others or through virtual means. This contributes to the abundance of resources and learning in the network.” I gave an example of ‘not-working’ out loud to show what freelancers do when not engaged in client work. I got good feedback from several other freelancers. These examples of how we work — methods & processes — are also valuable to new team members. They can get an understanding of the culture as more of the work has been made explicit.

It is at the team level that we can experiment collaboratively, such as employing trojan mice — “small, well focused changes, which are introduced on an ongoing basis in an inconspicuous way”. This is a wonderful metaphor for experimental change initiatives, but wouldn’t it be even better with some examples? This is the team value-add for knowledge management which improves sensemaking across the organization.

One Response to “adding value with teams”