One of the few areas where most nations cooperate is in infectious disease control. For nation states, cooperation is the best option in this type of ‘prisoner’s dilemma‘.

“On 31 December 2019, the World Health Organization was alerted about a cluster of pneumonia cases of unknown etiology in Wuhan, China, which prompted international concern of the potential public-health impact of an outbreak of a new virus [COVID-19] … With the now global spread of the virus, the urgency of a coordinated international response has amplified … This multi-pronged approach to curtail the outbreak, strongly supported by existing R&D, is a testament to the collaborative response of international organizations and the research and clinical communities … The initial global response to the 2019-nCoV outbreak illustrates the power of rapid communication and the importance of sustained research and collaborations that can be leveraged in future outbreaks. Sustained cooperation is essential to their resolution.” —Nature 2020-02-03

In Canada, special funds of up to $1 million per project have been allocated for rapid research into the recent outbreak of the novel corona virus [COVID-19]. Other nations, institutions, and corporations are also cooperating on molecular assays to diagnose COVID-19, including — China, Germany, Hong Kong, Japan, Thailand, USA. A special English-Chinese translation engine for scientific and medical use is being made freely available to researchers around the world by UK-based St. John’s Innovation Centre.

“CEPI [Coalition for Epidemic Preparedness Innovations] will coordinate engagements between GSK and entities funded by CEPI who are interested in testing their vaccine platform with GSK’s adjuvant technology to develop effective vaccines against 2019-nCoV. The first agreement to formalize this arrangement has been signed between GSK and the University of Queensland, Australia, which entered a partnering agreement with CEPI in January 2019 to develop a “molecular clamp” vaccine platform, intended to enable targeted and rapid vaccine production against multiple viral pathogens. CEPI has extended this funding to work on a 2019-nCoV virus vaccine candidate, and access to the GSK adjuvant technology will now support this early stage research.” —GSK Press Release 2020-02-03

An open source approach to sharing research seems to be the optimal model for rapid knowledge transfer.

“Since the 2019-nCoV gene sequences were made available through GenBank, some labs have developed testing kits to specifically detect the 2019 coronavirus in suspected patients.
So far, six teams have publicly shared their molecular testing protocols with the WHO. These include researchers at Hong Kong University and the Charité Berlin University of Medicine in Germany.
The research team from Berlin, for instance, developed one of the first tests for the 2019 coronavirus as soon as news of the outbreak came out, due to their expertise in SARS-related viruses.
When the first release of the sequence came out from China, the team was able to use it immediately to perfect their molecular detection kit.
The team’s 2019-nCoV diagnostics protocol was announced more than a week before the first coronavirus case was confirmed in Germany.
Since the start of this year, over 90 international papers regarding the novel coronavirus have been made available in the popular biomedical research repository PubMed.” —The Conversation 2020-02-12

According to one news report by Al Jazeera on 2020-02-06 — “The apparent rapid progress in the search for a vaccine to fight the coronavirus, according to analysts, is due to a decision by Chinese authorities to share information about the virus with the public.” However, the New York Times reports a different perspective, stating the outbreak was mishandled by Chinese authorities.

“Once the outbreak occurred, other Chinese scientists rapidly identified the virus and sequenced its DNA, posting it on Jan. 10 on a virology website for all to see. That was extraordinarily good and fast work.

Meanwhile, the Communist Party instinctively organized a cover-up, ordering the police to crack down on eight doctors accused of trying to alert others to the risks. National television programs repeatedly denounced the doctors as rumormongers.” —NYT 2020-02-15

The Beijing law professor — featured in the New York Times story — Xu Zhangrun, who is denouncing the regime’s action concludes that, “Regardless of how good they are at controlling the internet,” Xu added, “they can’t keep all 1.4 billion mouths in China shut.”

The spread of information has changed in the last two decades. Social media can act in a similar way to this disease outbreak — like a virus. But there are ways to better use social media, curating with tools based on relevance, not ad revenue, such as the corona virus feed on Cronycle. The research community uses social media in very specific ways to share knowledge, not like the average user.

“The world is not the same as it was in 2002 when SARS emerged. Social media platforms, including Twitter and Facebook, have allowed the rapid exchange of information — and sometimes misinformation. Many of the cutting-edge technologies and techniques scientists use today to analyze big data did not exist in 2002 either … With the use of Twitter, Skype, WhatsApp and bioRxiv (a website where scientists can upload their scientific papers for public review), clinicians, virologists, bioinformaticians (biologists who work with big data) and epidemiologists from around the world have focused and coordinated their efforts to fight the outbreak and contain its spread.

Specifically, scientists are using Twitter to brainstorm and provide ideas that help advance research on 2019-nCoV.” —The Conversation 2020-01-30

Azeem Azar has identified several ways that the corona virus outbreak will change our world. This may be the tipping point into the network era.

1. Reinforce the power of scientific collaboration and the open-sourcing of global threats.
2. Digital quarantines through better information and social credit systems.
3. Reinforce the importance of genomic technologies.
4. Remote everything. [think changing nature of work]
5. Encourage self-sufficiency especially around food, energy, and products.
6. Lend support to the nativists, populists, statists, and wall-builders. [the down-side]
—The Exponential View 2020-02-06

In Canada, some people are urging better cooperation with China — “There is a Chinese saying: “Friends show their love in times of trouble, not in happiness.” We hope we can focus on our shared humanity and give Chinese medical workers and citizens a hand during this extremely difficult time – for their sake, in the name of selflessness, in the spirit of Dr. Bethune.” Canadian cooperation with this outbreak may even thaw Canada-China relations, more so than the previous 14 months of talks.

This disease, and how we are dealing with it in a globalized digital world, highlights the fact that we have entered the network era. The market-dominated era is waning. Even the nature of knowledge is changing. Machine learning is enabling the analysis of enormous data sets. It’s a world of humans and machines working together. Cooperation is the optimal behaviour in a knowledge network. This will call for new forms of leadership and modified roles for our institutions and markets. 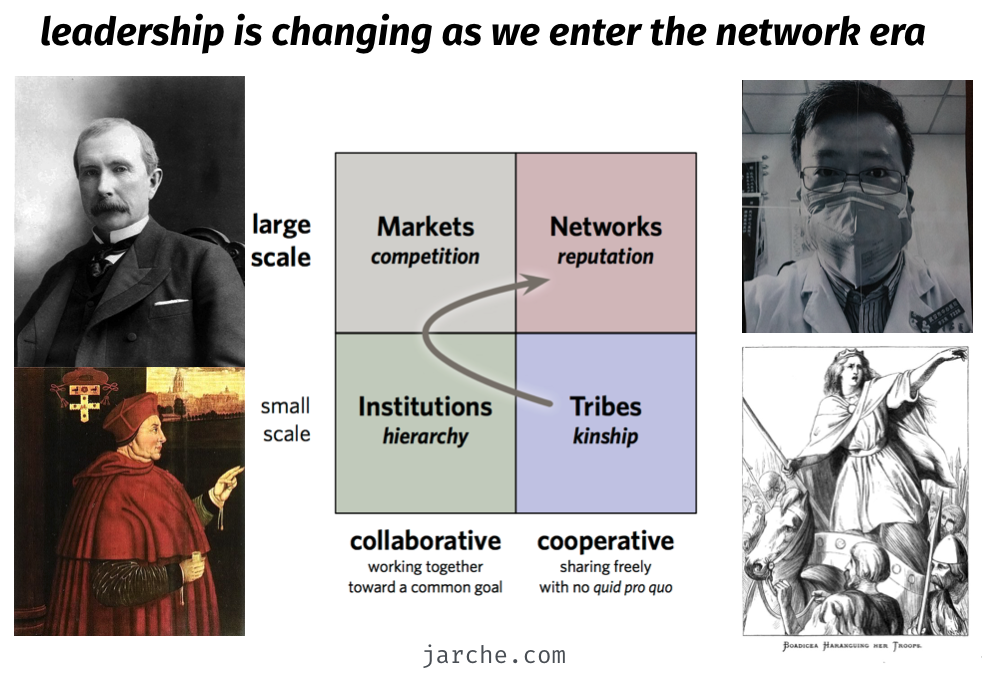 2 Responses to “leadership through cooperation”