On 6 June 1944 the First Canadian Army landed at Normandy. It had never been tested in battle as a formation. The complications of drills in England had been replaced by the complexity of war and the chaos of battle. By the end of August, two brigade commanders and five commanding officers had been removed as they were deemed unsuitable.

“[In Normandy] There still remained, however, that proportion of officers who were not fully competent for their appointments, and whose inadequacy appeared in action and sometimes had serious consequences.” —Breakout at Falaise

How many organizational leaders today are in the same situation as those inadequate officers in the Canadian Army — unfit for the post-invasion reality?

In a recent online session on Decision-making in Crisis hosted by Cognitive Edge, Sonja Blignaut said that today, “we are constantly on the boundary between competence, and incompetence, and that is not a comfortable place to be”. This is the reality of a global pandemic. Gary Klein noted that expertise has been compromised with this pandemic and that even evidence-based medicine is under stress in this environment due to the fast pace of change and the lack of understanding of this novel virus.

Klein said that in order to build expertise quickly, those working to counter the virus are paying attention to professional rumours as early signs of new information. He said that leaders who are used to getting a lot of data and then applying good analysis to make decisions, are ill-suited to make decisions when there is little data. But decisions still have to be made. One key in making these is to ensure that any decision you make today still leaves you with options for tomorrow.

Look back at December 2019 and remember what kinds of decisions and plans were being made and how they were made. Data, big data, was analyzed. A-B testing was done. Agile initiatives were iterating toward their next cycle.

Today, some organizations are preparing to get back to normal. Will they be ready for whatever next shock will hit them? Do they think this pandemic will disappear and we will never face another one in our lifetimes? As Dave Snowden said in the decision-making session, “Covid is God’s gift to humanity, because it’s a wake-up call”. It’s time to wake up.

Complexity and chaos are the new normal as climate change drives more crises our way — pandemics, refugees, environmental disasters, and the overall degradation of our environment. To prepare for chaos, we need people who can act. Identify these people and give them experiments or skunk-works to play with. We will need leaders who can also deal with complexity. They will have to be constantly experimenting and probing their ecosystems. Organizations who are serious about surviving in the ‘post-covid’ normal will have to take a hard look at their leadership and management structures. The time to change is now, not when the next crisis strikes.

While many of our professions and organizations can deal with some complexity, few are adapted to deal with chaos on a large scale. Chaos — violent political action, climate change, pandemic — require structures that promote curiosity and resolve. With frequent chaotic events to deal with we have to organize in temporary, negotiated hierarchies that can quickly form and re-form in order to test novel practices. The ability to do this requires diverse thinking, open structures, and trust among those doing the work. Now is the time to get these in place.

Humans have the ability to deal with very complex things, yet too often our cultural and organizational barriers block us from using these innate abilities. With increasing chaos, creativity is becoming even more important. Look for the misfits and find a way to work with them.

For a deeper dive into these ideas, see learning in complexity & chaos. 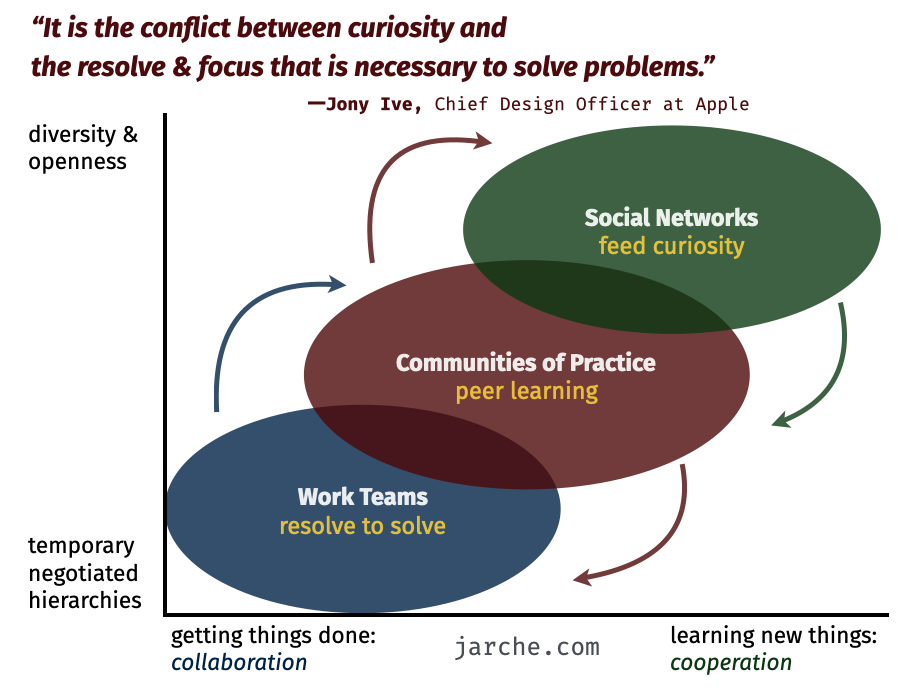 3 Responses to “our wake-up call”