I use the chasm model to explain my professional work of 1) seeing what is ready to cross the chasm by 2) staying connected to the innovators & being an early adopter so that 3) I can help mainstream organizations. It’s a good graphic summary of my consulting practice.

Five years ago I looked at a couple of models (Rogers & Gladwell) in the Dummies Guide to Change and came up with a model on how you might be able to effect a change in a population. It wasn’t tested, it was just an idea. One of the core ideas was the law of the few, or the notion that a few key types of people help to speed social communication. As Charlene Croft puts it [looking at how Twitter is used]:

Connectors are individuals who know lots of people and who use those connections to their advantage.  Connectors are people who have invested in social, cultural and identity capital and who can convert those intangible resources into pretty much whatever they decide to.

Mavens are the senders and receivers of information.  They are the people who always have the pulse on the good deals and breaking stories of the day.  Mavens are the trendsetters and the people who you turn to to find out about this thing or that.  Citizen Journalists are types of Mavens, often scooping the mainstream media in reporting “from the ground”

Salesmen are the persuaders of society.  They are the people who dedicate a great deal of their lives to selling people on their ideas. 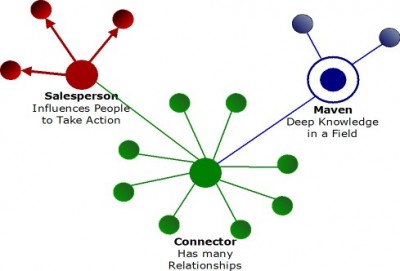 I figured that if you want to foster large-scale change in an organization or even a network, then you would:

I also figured that the Late Majority and the Laggards were not worth the effort, time and resources. 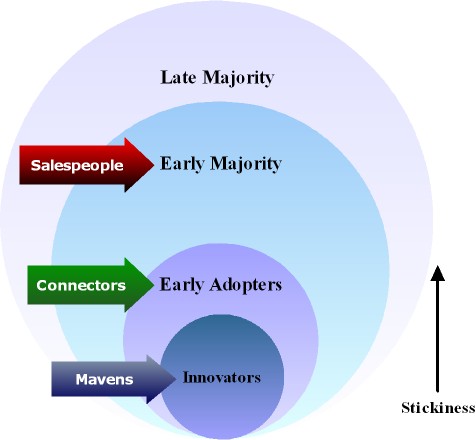 I’ve noticed that this is what has happened with some of the ideas that I’ve worked with in those five ideas. For example, informal learning in the organization was an idea five years ago. Jay Cross (maven) published one of the first business books on the subject in 2006 – Informal Learning. Many connectors, especially educational technology and business bloggers, took the idea and spread it. Then in 2009 we see it being discussed as the core idea of the ASTD opening keynote, and moving into the mainstream by several salespeople (vendors, service providers) looking for business opportunities.

This is just a working model but it may help in looking at how you can get your new ideas into the mainstream.

5 Responses to “Connecting ideas with communities”