In Twitter and the Law of the Few, I mused how Twitter as a social network can be great for Connectors, Mavens & Salespeople. Later, in adapting to a networked world, I concluded that Mavens can deeply understand a situation, Connectors are needed to get the word out, while Salespeople have to convince those in control to take action. All three are needed to mobilize a network. I then looked at this from the perspective of spreading social capitalism. Generally, Mavens exhibit the greatest intellectual capital; Connectors have the most diverse (creative) networks and Salespeople get things done. I wondered if this metaphor/model could help to get social capitalism “across the chasm”. You could first identify sufficient Mavens, Connectors & Salespeople (it seems that all three are needed) and then build up to the 10% critical mass necessary to effectively spread ideas. 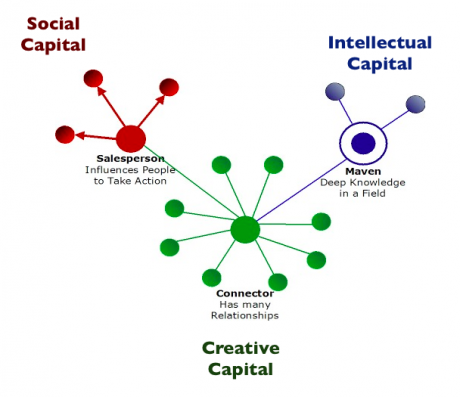 Dave Gray has a written about the anatomy of a network and the work of Ron Burt. Dave states that, “The power of an individual node in any network can be considered along three dimensions: Degree, closeness and betweenness”, and then explains this with one of his great sketches: 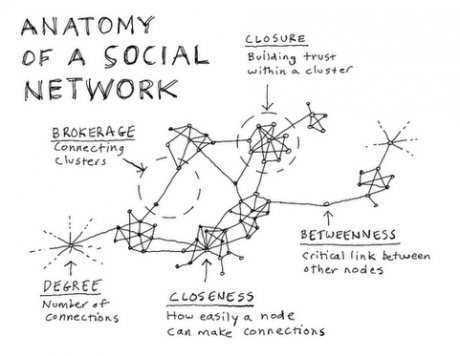 Degree: (number of connections) Is this a major attribute of Connectors?

Closeness: (how easily a node can connect with other nodes) Is this a major attribute of Salespeople?

Betweenness: (the degree to which a node forms a critical link to other nodes) Is this a major attribute of Mavens?

Thus, the most powerful person or organization in any network is one that has a high number of potential connections, all of which which are relatively close and thus easily accessible, while at the same time enjoying a position within the network such that it can choose to block or grant access to other nodes.

That “powerful person” is likely three or more people, as Dave notes when he says, “person or organization”. This highlights the importance of cooperation and collaboration for net work, in my opinion. It is not often that one person is simultaneously a Maven, a Connector, and a Salesperson. In a network, the work of many is needed.

3 Responses to “The work of many”