Every fortnight (or thereabouts) I curate some of the observations and insights that were shared on social media. I call these Friday’s Finds.

@ScottSantens: “Our problem is not that jobs are going away thanks to technology. It’s that we require jobs for income, and believe 40 hours is ‘full-time'”.

@Richard_Florida: “Cities need to be places of chance encounter and eccentricity, rather than exclusivity and segregation.”

What are the lessons people most often learn too late in life? by @dsearls

“Humans are learning animals, and among the things we all learn eventually—or should—is that knowledge is provisional, truths are opinions, and our first calling is to learn more and keep our mind open, even though that gets harder as experiences accumulate and prejudices with them.”

Feynman was a truly great teacher. He prided himself on being able to devise ways to explain even the most profound ideas to beginning students. Once, I said to him, “Dick, explain to me, so that I can understand it, why spin one-half particles obey Fermi-Dirac statistics.” Sizing up his audience perfectly, Feynman said, “I’ll prepare a freshman lecture on it.” But he came back a few days later to say, “I couldn’t do it. I couldn’t reduce it to the freshman level. That means we don’t really understand it.”

The Hidden Influencers on Every Team, via @S_dF

On his first day, we sat down in front of a large whiteboard, and I gave him a one-hour history lesson on our organization, ranging from where we fell within the military’s formal hierarchy to where our tactical units fit within our own. I walked him through our relationships with other military units, how things had evolved post-9/11, and how our current structures were designed to function. He took it all in.

“Now here’s the bad news,” I said. “It doesn’t actually work like that.”

“There’s a complex web of key personalities and networks that make it function,” I pointed out, “and your job sits right in the middle of them.” He laughed, acknowledging the challenge that posed. My advice was simple: I’d be back in two months, and when I got home, I wanted him to explain to me how he thought things actually worked, including his take on key personalities, critical relationships they maintained, and any other minutiae to navigating our system. Until then, he was not to engage directly with anyone outside of our team. We’d move slowly at first so that he’d be able to move fast in the long run.

The Faceless Boss, via @britz

Uber has created one of the fastest-growing workforces in American history. And to recruit drivers, company leaders are fond of saying you can “Be Your Own Boss.” But through dozens of interviews and an informal survey, NPR found that hundreds of drivers feel the company is not living up to that promise. They say the San Francisco-based startup sets strict rules and punishments, just as other bosses do, but it’s eerily distant. Even in dire situations — like when you’ve been axed — it’s impossible to reach a human in charge. This facelessness is decidedly unlike other workplaces.

Last year, once again Jos de Blok and Buurtzorg proved them wrong. They even surprised the most skeptical people when they took over more than 2,000 employees from a Dutch home-care provider in crisis. After the employees worked their last day in a traditional, hierarchical organization on Friday, they started their Monday in a fully self-managed organization. While chaos was expected, the transformation went surprisingly smooth. Jos: “We experienced some minor difficulties, but now, one year later, everything runs very smoothly and we have amazing results.”

“Hermetically sealed executive planning cube. Detail from my upcoming epic explanation on why organisations have to change” by @voinonen 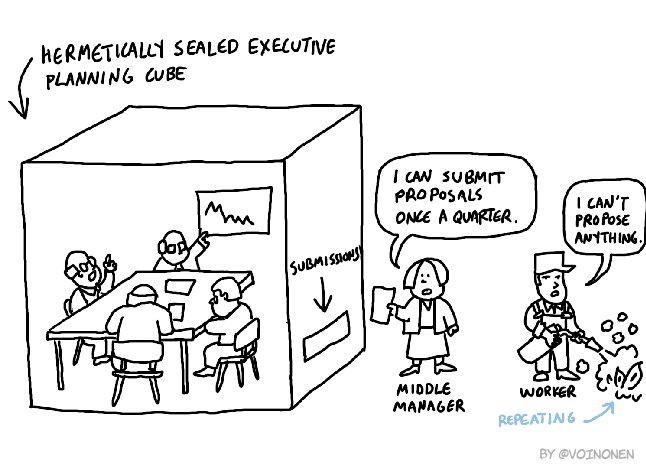