“The better the state is established, the fainter is humanity.” —Nietzsche, Notes, 1874, via @surreallyno

“Being Irish, he had an abiding sense of tragedy, which sustained him through temporary periods of joy.” —W.B. Yeats, via @FishinWaterProd

“When he laughed, respected senators burst with laughter, And when he cried the little children died in the streets.” —W.H. Auden, Epitaph on a Tyrant

“Ultimately, the study finds that cultural capital has been a significant factor in the development of urban neighborhoods in the superstar cities of London and New York, both during and after the Great Recession. Culture is not a mere afterthought or an add-on, but a key contributor to urban economic growth. But in fueling neighborhood growth and development, it has also played a role in rising housing prices, contributing to gentrification.

Culture, then, is bound up with the New Urban Crisis — a crisis of development and success — which is making our largest and most dynamic cities more expensive and less affordable, and in doing so, threatens the very economic, racial, and cultural diversity which has fueled their cultural creativity in the first place.”

Amazon has already begun automating its white-collar jobs, via @CharlesHGreen

“The company launched a pilot project called ‘hands off the wheel’ that automated demand forecasting and negotiating prices with vendors, and the rise of the Amazon Marketplace, where vendors can bypass Amazon’s buyers and sell their wares directly on the site on their own … the algorithms originally could be overridden by humans if they thought there was a mistake. But as the algorithms proved their worth, it became necessary for employees to justify why they were overriding the software … ‘Computers know what to buy and when to buy, when to offer a deal and when not to. These algorithms that take in thousands of inputs and are always running smarter than any human.'”

The Hard Truth About Lost Jobs: It’s Not About Immigration, by @HeatherMcGowan

The Next Jobs to Go: Knowledge Jobs (or Why You Should Pay Attention)

“This productivity paradox that first affected the hard hat jobs the American Rust Belt is now creeping into the so-called ‘knowledge worker’ jobs that afforded comfortable upper middle-class incomes. More worrisome for many workers, this fourth wave of automation – sometimes called the Fourth Industrial Revolution – is hitting harder and faster than previous disruptions, and will affect cognitive and physical labor just as severely. While computerized cognitive labor is replacing humans, it is also liberating humans to do other, perhaps more creative, work. Much of this new work is yet to be imagined, yet it will no doubt enable humans to reach new levels of potential.” 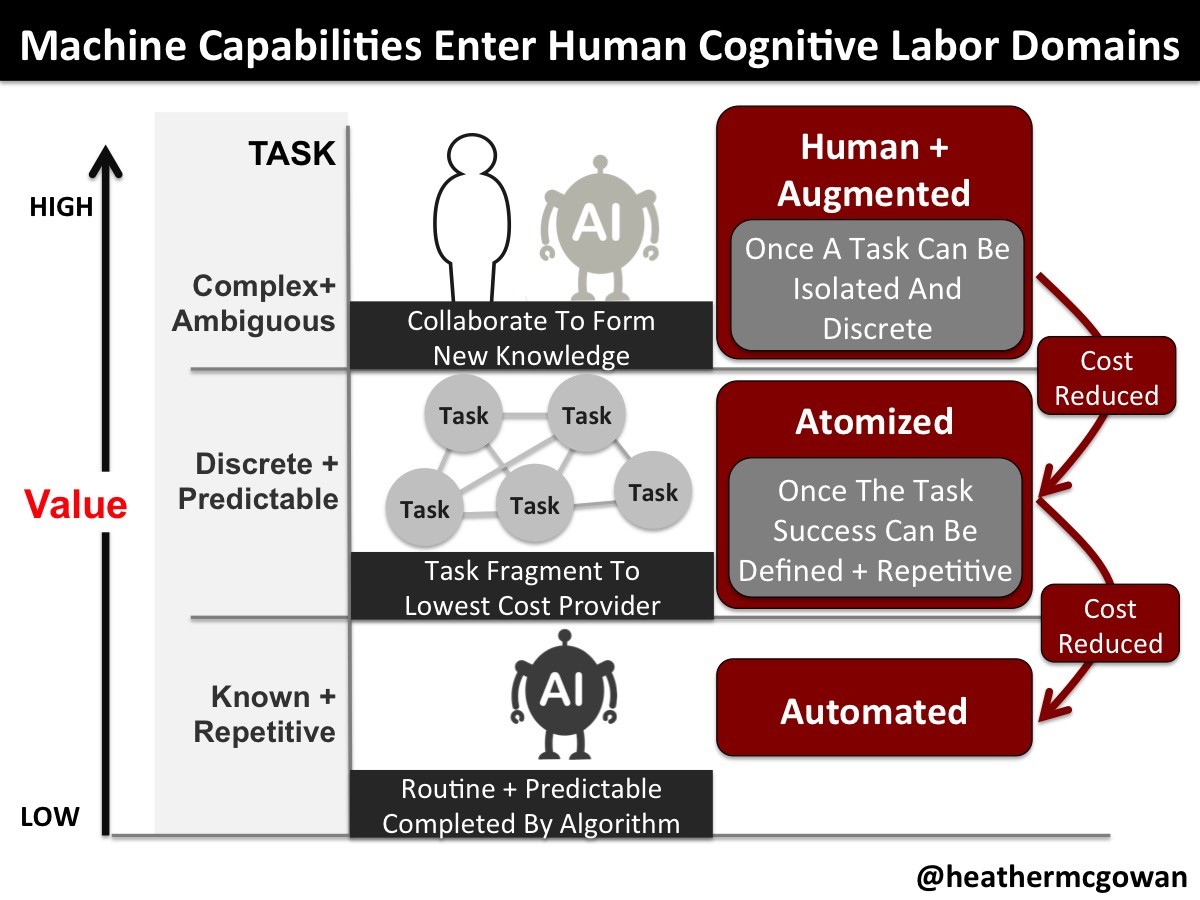