What is the thing the East had that the West didn’t — that made all the difference in fighting Covid, much more so than money and resources and so forth? Sociality. Social cohesion. Social bonds. Trust, relationships, ties. An economist might call that “social capital.” You can use that term if you want — I won’t, because, like I said, this lesson goes so, so deep that I want to take pains to really explain, and you can tell me if I succeed.

What the East was able to do was cooperate as societies to fight Covid. And it turned out that you couldn’t beat Covid without cooperation at the largest scale — the social scale. The scale of a city or town or block just wasn’t enough. And it was because it enjoys significantly higher levels of sociality that the East was able to — as we say in the West — “pull together” and beat off Covid.

Still, as the good news from these vaccines rolls in, we should remember and celebrate the gift Dr. Zhang and his team gave us, perhaps the most important ones for fighting a pandemic: the gift of time and gift of information. Dr. Zhang acted without being incentivized by the huge amounts of money that the companies will receive — Moderna’s stock has increased almost 700 percent already — and he faced down potentially catastrophic consequences for himself and his lab.

For many years, we will be analyzing the failure of many governments and our institutions in their responses to this pandemic. But the successes are real, too. More than anything, we should also remember those who bravely stepped up when it counted: the healthcare workers and the researchers around the world—starting with Professor Yong-Zhen Zhang and Doctor Li Wenliang of China.

In other words, across multiple analyses, Spiegel and Tookes identified a fairly consistent set of policies that seemed to help (mask mandates, closing restaurants, stay-at-home orders, limiting gatherings to 10 people) and a fairly consistent set that seemed to hurt (closing low-risk businesses, limiting gatherings to 100 people). Other policies, including closing schools, appeared not to affect fatality rates either way.

Spiegel and Tookes are continuing to collect data and hope to refine their results in the future. One big unanswered question is how different policies interact with one another. “It might be that as long as everyone’s wearing masks, a given policy is less effective,” Tookes says.

What might this mean for policymakers? The data suggests that closing certain businesses can reduce fatalities, but “we all know there are other costs,” Tookes says—and what’s worth it depends on context and priorities. “Our goal wasn’t to prescribe a particular policy, but to help inform the decisions.”

We Have No Idea What Happens Next via @timkastelle

But everyone in the world has suddenly been exposed to problems they had never seen before. They’ve become aware of new risks. New constraints in how they live, work, and play. A whole new set of perspectives on how to keep your family safe, run a business, and use technology.

Some of the changes that will bring are obvious. We’re already better and faster at creating vaccines than we were a year ago. Doctors are more knowledgeable. Remote work is more efficient. Travel is less necessary.

Then there’s a second tier of change: perhaps using our new knowledge of mRNA vaccines to treat other diseases, like cancer. It seems likely, but who knows.

Then there’s the big unknown: the crazy, disconnected, counterintuitive change set in motion this year that we’ll only be able to piece together in hindsight. The kinds of things that only happen when seven billion people have their lives thrown upside down, experience a bunch of stuff they’d never imagined, and are either motivated or forced to do something completely different than they had considered in January.

No one should even guess what that might be. The unpredictability is the point.

Online disinformation and the EU’s response

Fake news’ and disinformation – information deliberately manipulated with the aim of fooling people – have become an increasingly visible global phenomenon. Social media and their personalisation tools have made it easier to spread bogus stories. They often use emotions to capture attention and generate clicks, for economic or ideological reasons. Even young, digital-savvy people find it difficult to identify manipulated news. Significantly, six in ten news items shared on social media were not even read first by the user who shared them. Some 85 % of Europeans see ‘fake news’ as a problem in their own country, and 83 % view it as a problem for democracy in general. This compass will help you navigate the ocean of information, and find your way through waves of lies and disinformation. 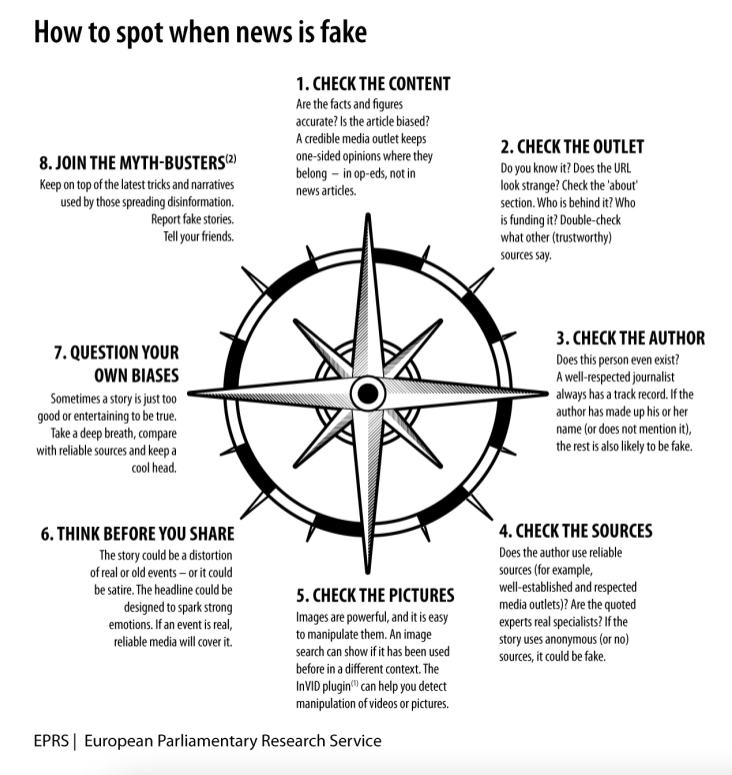