Learning is the new literacy. Personal computers are just one example. We buy new ones every few years. Operating systems change. Programs change, get replaced, or become obsolete. But we often continue with the same habits until something goes wrong. Few of us do the equivalent of ‘looking under the hood’. We learn enough to get our work done, but often do not take time to understand the underlying systems and logic.

By not being active learners we lose the agility to react quickly to changing situations. We have to take the time to keep learning. It’s an effort that too many of us avoid. When was the last time you learned a new computer program? How many books do you read? When did you try to master a new skill? These are things we need to make a priority. If not, we risk becoming obsolete before our time. Aiming for retirement is not a bad thing, but what happens when it is forced on us and we are not ready?

“Statistics Canada estimates 158,400 people aged 55 to 64 were handed permanent layoffs in 2015. Is there any hope of a comfortable retirement for those folks?” – CBC News

When our son was in junior high school he came home one afternoon and said, “There seem to be two types of people, Dad.” “What are they?” I asked. “Gamers, and non-gamers”, he responded. As an active computer gamer, he was comfortable being given a problem with no evident solution. Most computer games do not come with instructions, as learning how to master the game is part of the game. He said that other students who were not gamers did not have any strategies on how to look at the problem they were given, as there was no set-step method provided by the teacher.

How do gamers learn? They try things out and usually fail: lots of times. They learn from these mistakes and look for patterns. If they get stuck, they check out what others have shared, in online forums. They may ask a friend for help. Sometimes they will look for a ‘hack’, or a way around an impasse. Once they learn something, they might record it and share it, so others can learn. What they do not do is look for the rule book.

There are similarities in learning how to participate on the Internet or the Web. Some people just want a formula or procedure so they can get on with their business. Facebook makes this very easy. Others want to have more control. Twitter provides a bit more. But there are others who really want to understand what they are doing. They might set up their own online community using open source software and their own servers. While we cannot all be computer geeks, we live in a computer-driven network age. We ignore automation, the Cloud, the Internet of Things, and surveillance technologies at our peril.

Learning is the only literacy that will enable us to counter the negative effects of digital technologies. This literacy is also social. It is learning through communities of practice and knowledge networks, which we have to engage with to make collective sense. How many of those permanently laid-off workers over 55 have external professional networks that can help them find work or get support? Over the years I have met many people in their 40’s or 50’s who suddenly find themselves without work. Most of them do not have a professional network beyond their organization where they may have worked for a decade or more. Once outside the company, they are adrift.

Being an active learner by connecting with others outside our everyday lives can expose us to a diversity of skills, knowledge, and perspectives. In a creative economy we are only as good as our networks. An effective network encourages us to keep learning. A good community of practice changes our practice. The more often we change, the better we get at it. For example, my Personal Knowledge Mastery framework was developed from the necessity to develop skills to be competitive in the consulting market. PKMastery is one way to push ourselves to keep on learning. There are many other ways to keep up, but active learning in social networks is no longer a luxury. 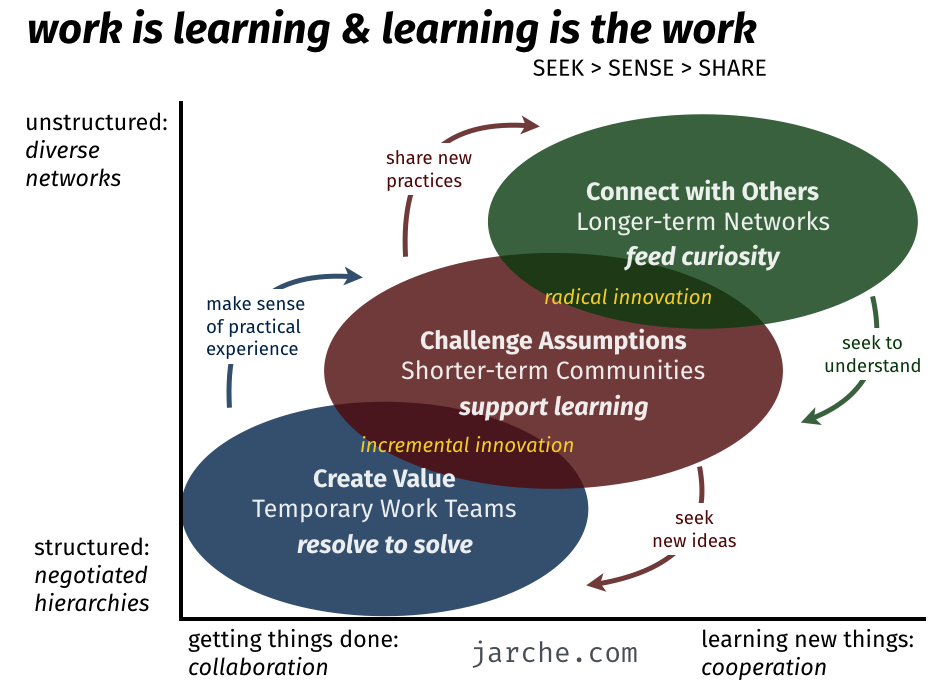 Artists are like gamers as they too have to fail many times as they master their craft. Today, we all need to think like gamers and artists. But being an artist is not easy. Scott Berkun says that, “it’s a discovery all artists make: the most interesting and bravest work is likely the hardest to make a living from.” There are no simple recipes to become an artist.

The artistic mindset is essential to help navigate the complex relationships of the network era. Artists understand media. The age of print promoted linear thinking but digital media require more divergent thinking. Marshall McLuhan observed that, “Print centralizes socially and fragments psychically, whereas the electric media bring man together in a tribal village that is a rich and creative mix, where there is actually more room for creative diversity than within the homogenized mass urban society of Western man.” Today, the world needs more people with an artist’s perception.

One challenge with thinking, acting, and working like an artist is that the mind-set is not suitable for traditional salaried employment. Most self-employed people would not return to salaried work, knowing the lifestyle would be too constraining. But the lack of constraints also means a lack of stability. Living off of your intellectual property is a challenge. If you are considering an artistic approach to life and work, look for other artists. It is from them that you will learn the most. First find a community of practice.

For the past century we have compartmentalized the life of the citizen. At work, the citizen is an ‘employee’. Outside the office he may be a ‘consumer’. Sometimes she is referred to as a ‘taxpayer’. All of these are constraining labels, ignoring the full spectrum of citizenship. As the network era connects people and things, society needs to reconnect with the multifaceted citizen. Gamers and artists already blur these lines.

The last century’s division of work and personal life are still evident in many organizations where employees are cut off from their online social networks. Workers are often expected to put their personal lives aside and concentrate on the work at hand for eight or more hours per day. But as we have connected computers and devices, we have made standardized work obsolete. In the emerging workplace, where complex and creative tasks become the norm, work cannot remain isolated from the rest of the world.

Complex work requires multiple perspectives and non-linear processes. While work teams still need time and space to get things done, they also have to stay connected to the quickly-changing external environment. The challenge for the modern workplace is to connect external social networks with internal projects, and still remain capable of getting deadline-driven work done. This balance requires organizational systems that enable knowledge to flow, but more importantly it requires workers who are also engaged citizens.

Alexis de Tocqueville wrote Democracy in America based on his travels in 1831, and identified ‘associations’ of citizens to be a driving force in the new democracy. These associations could also be described as communities of practice – self-forming groups of engaged citizens. John McKnight, in The Careless Society, described these groups as having three key capabilities: “the power to decide there was a problem, the power to decide how to solve the problem – that is, the expert’s power – and then the power to solve the problem”. The association of engaged and connected citizens that enabled a functioning democracy in early America is now necessary in the early network era. As de Tocqueville saw how a society could function without an aristocracy, we now must see how companies can function without a managerial elite, and people can operate without bureaucratic overlords.

Both the gamer and artist mindsets can help us navigate the network era. We need to probe the system, detect patterns, and create something new. It’s time to prepare for a hustle economy by becoming gamers, artists, and aggressively engaged citizens. Note: This post is a combination of 2 older posts and was originally published on LinkedIn but I moved it back to my blog due to technical issues with LinkedIn.

2 Responses to “gamers, artists, and citizens”