The TIMN [Tribes + Institutions + Markets + Networks] model shows how society grew from a collection of tribes, added institutions, and later developed markets. These aligned with revolutions in communications: from oral, to written, to print. The network era began with the advent of electric communications, though it is by no means completely established.

Each type of societal structure has required different types of leadership. Alexander the Great was probably one of the best tribal leaders. He led his armies from the front and created an enormous empire. After his death, some of his generals created long-lasting institutions not based on military tactics. Ptolemy’s library at Alexandria is one example. Later, institutions like the Catholic Church dominated more through soft institutional power, rather than wielding swords. Others did that for them when necessary. As a market society developed, new types of power were exercised by the Fuggers and the Hanseatic League. Later, captains of industry such as Andrew Carnegie, would dominate in their markets, often circumventing institutional power. 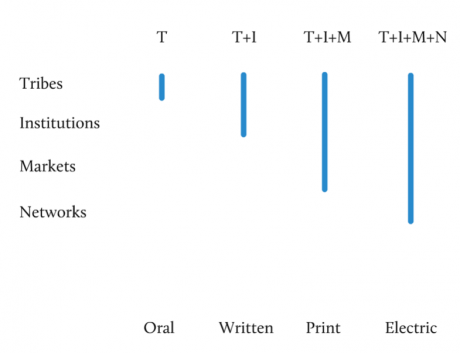 Niels Pflaeging states that, “All organizations know three kinds of power, and two forms of leadership“. 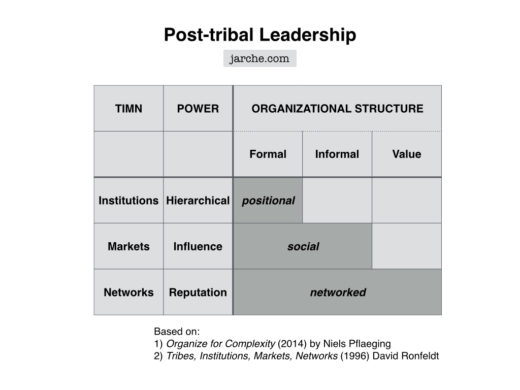 In almost all organizations today, positional power is alive and well. For some managers, this is all the power they have, and they are at the mercy of the hierarchy. If they lose their position, they lose their power. More effective leaders influence people through their social leadership abilities. This is what most modern leadership training programs focus on developing. In the network era, effective leaders also have to build their reputational power through networked leadership.

Like the TIMN model, social and networked leadership can build on each other.

One major change as we enter the network era is that positional power (based on institutions and hierarchies) may no longer be required to have influence in a network society.

This may change a lot about how we think about leadership.

Leadership training usually does not work. In most cases, leadership coaching and mentoring is not that effective either. Perhaps the problem is the nature of leadership. Is it a skill that can be fairly quickly developed, or rather a craft that takes time to develop? When it comes to crafts that require much time and practice, modelling may be a better method than shaping.

Education and training are shaping technologies. They reward successive approximations of the desired behaviour. Modelling, on the other hand, is the foundation of social learning. Trying to directly shape behaviour can work when the task to be done is straight-forward, time is of the essence, and the learner is ready. For complex behaviours like leadership, consisting of several skills, modelling may be best, as there is much implicit knowledge to be learned, which takes time. Education and training usually don’t provide the time for enough reflective practice. As long-time Canadian painter Stephen Scott has noted, most of what he knows about the technique of oil painting he learned on his own after leaving university. Management and leadership are similar types of abilities.

If we look at how organizational training and development has functioned over the past half-century, it has been mostly separate from the work being done and focused on shaping behaviours. But the valued work in the enterprise is shifting, as it increases in variety and decreases in standardization. There is strong evidence that we need to integrate learning into our work in order to deal with the increasing complexity of knowledge work. Modelling is integrative, while shaping is usually external and out of the work context.

Consider also that as knowledge expands and new information is constantly added, who has the base knowledge to do the shaping anyway? In our networked world, modelling behaviours may be a better strategy than shaping on any pre-defined curriculum. With modelling, the learner is progressively supported. In connected leadership, people can be both teachers and learners. Therefore neither training programs, nor coaching, are enough. Leadership by example becomes the key.

Connected leadership is not the status quo and it is not based on great man theories. As organizations, markets, and society become networked, complexity in all human endeavours increases. There are more variables as a result of more connections. In complex adaptive systems, the relationship between cause and effect can only be known after the fact. This makes traditional planning and control obsolete. Connected organizations must learn how to deal with ambiguity and complexity. Those in positions of leadership have to find ways to nurture creativity and critical thinking. The connected workplace is all about understanding networks, modelling networked learning, and strengthening networks. In networks, anyone can show leadership, not just those appointed by management.

As a result of this improved trust in the workplace, leadership will be seen for what it is — an emergent property of a network in balance and not some special property available to only the select few. This requires leadership from everyone — an aggressively intelligent and engaged workforce, learning with each other. In the connected workplace, it is a significant disadvantage to not actively participate in social learning networks.

Leadership in networks does not come from above, as there is no top. To know the culture of the workplace, one must be the culture. Marinate in it and understand it. This cannot be done while trying to control the culture. Organizational resilience is strengthened when those in leadership roles let go of control.

The connected workplace requires collaboration as well as cooperation. Both collaborative behaviours (working together for a common goal) and cooperative behaviours (sharing freely without any quid pro quo) are needed, but most organizations today focus their efforts on shorter term collaboration. However, networks really thrive on cooperation, where people share without any direct benefit. Modelling cooperation is another important leadership skill in the connected workplace.

Connected leaders know that people naturally like to be helpful and get recognition for their work. But humans need more than extrinsic compensation, as our behaviour on Wikipedia and online social networks proves. For the most part, people like to help others. Cooperation makes for more resilient knowledge networks. Better networks are better for business.

Research shows that tacit knowledge flows best in trusted networks. Trust pro- motes individual autonomy and this becomes a foundation for more open social learning. Without trust, few are willing to share their knowledge. An effective knowledge network also cultivates the diversity and autonomy of each worker. Connected leaders know how to foster deeper connections which can be developed through meaningful conversations. They understand the importance of tacit knowledge in solving complex problems.

The power of human social networks, like electricity, will inevitably change almost every business model. Those who are trusted as leaders will need to understand the new connected workplace. Connected leadership starts by organizing to embrace networks, manage complexity, and build trust. 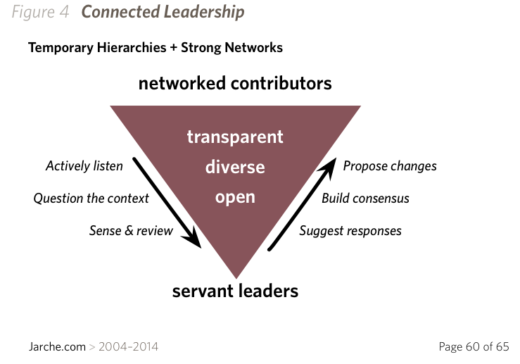 Managers, acting as servant leaders in a connected enterprise, should spend much of their time focused on complex situations, where the relationship between cause and effect can only be seen after the fact. Actively listening requires an engagement with networked contributors who are closely in touch with their environment. Everyone should continuously question the contexts in which the enterprise is working. Appointed servant leaders have an even greater responsibility to look at the big picture, not manage the contributors, who for the most part can manage themselves when everyone’s work is transparent. Leaders can then propose changes and build consensus around suggested responses. Connected leadership is helping the network make better decisions.

You can support my writing by purchasing my latest ebook: finding perpetual beta

11 Responses to “leadership for the network era”