I will be speaking this Wednesday in Issy-les-Moulineaux, France at a conference on ‘The Smart City, the Cloud, and Citizens’.  My presentation will be short and focused. Here are the main points, in English. The French version may be webcast, so watch my Twitter feed for updates.

We are connecting our cities to the cloud via the internet of everything, so that objects share data with each other. With these data, governments, organizations, and companies can sense patterns and make decisions – from traffic control to geographically specific advertising. But this is merely the tip of the iceberg of the real potential of smart cities and digital networks. A major challenge for society will be to enable an intelligent and aggressively engaged citizenry to build upon the potential of these growing digital interconnections.

For the past century we have compartmentalized the life of the citizen. At work, the citizen is an ‘employee’. Outside the office he may be a ‘consumer’. Sometimes she is referred to as a ‘taxpayer’. All of these are constraining labels, ignoring the full spectrum of citizenship. As the network era connects people and things, society needs to reconnect with the multifaceted citizen. This is the primary role the smart city can play.

The last century’s division of work and personal life are still evident in many organizations where employees are cut off from their online social networks. Workers are often expected to put their personal lives aside and concentrate on the work at hand for eight or more hours per day. But as we have connected computers and devices, we have made standardized work obsolete. In the emerging workplace, where complex and creative tasks become the norm, work cannot remain isolated from the rest of the world.

Complex work requires multiple perspectives and non-linear processes. While teams still need time and space to get things done, they also have to stay connected to the quickly-changing external environment. This week’s events in Greece and Europe show the volatility of interconnected political-financial systems. The challenge for the modern workplace is to connect external social systems with internal projects, and still remain capable of getting deadline-driven work done. This balance requires organizational systems that enable knowledge to flow, but more importantly it requires workers who are also engaged citizens. 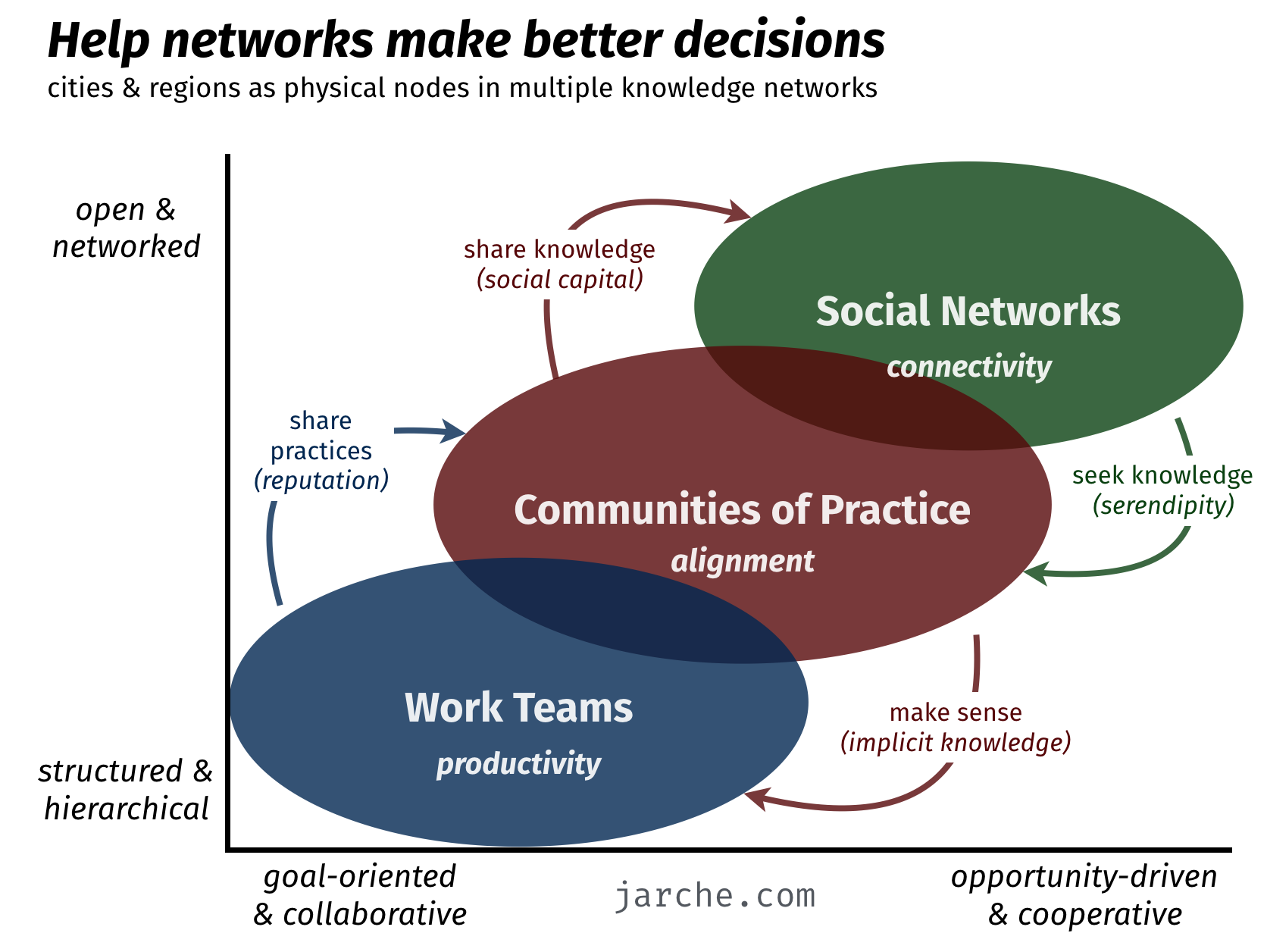 Alexis de Tocqueville, in his book ‘Democracy in America’ based on his travels in 1831, identified ‘associations’ of citizens to be a driving force in the new democracy. These associations could also be described as communities of practice – self-forming groups of engaged citizens. John McKnight, in The Careless Society, described these groups as having three key capabilities: “the power to decide there was a problem, the power to decide how to solve the problem – that is, the expert’s power – and then the power to solve the problem”. The association of engaged and connected citizens that enabled a functioning democracy in early America is now necessary in the early network era. As de Tocqueville saw how a society could function without an aristocracy, we now must see how companies can function without a managerial elite, and cities can operate without bureaucratic overlords.

Today, the connected citizen must concurrently be the connected worker, as well as the connected taxpayer and the connected consumer, among many other roles. Cities can play an important part in this transition. They are the logical place for citizens to act out their roles on a daily basis. For example, co-working spaces are one way to enable the necessary cross-pollination of ideas and action. Public transportation infrastructure can enable more serendipitous encounters between citizens. Public spaces and walkable communities can encourage citizens to connect. Smart technologies should be designed to enable more connections between citizens.

The smart citizen is connected: to communities of practice, extended social networks, the community, and society. Helping citizens engage intelligently is another role that smart cities can play. In addition to creating space, opportunities to develop skills and abilities should be supported. Cities should be encouraging citizens to seek new connections and knowledge, make sense of these in a disciplined manner, and share their knowledge. Smart cities need smart citizens.