Platform capitalism is the ability of a common internet exchange medium to enable easy commercial transactions. Buyers of services get convenience, while sellers get a larger market. The spoils go to the owner of the platform, receiving a significant percentage of revenues. Most of these platforms are created when regulations and oligopolies make these transactions difficult by traditional means. Platform capitalism initially disrupts a sector that is poorly served. It requires four contributing factors.

For example, we see many people willing to drive for a company like Uber in order to increase cash-flow. But drivers for Uber have no career track and as the platform gets richer, drivers become replaceable commodities. Over time they may even be replaced by self-driving cars. This is an indicator of what a post-job economy may look like for many.

One of the outcomes of this phenomenon [platform capitalism] is that over time the democratization of communication, the initial impetus for this blog, gets sideswiped, to varying degrees, by new re-massifying forces. The niche offerings that made the online environment so refreshingly unlike the mass market world of hierarchical decision-making, capital-intensive production and distribution, and limited shelf space, are still there of course, but what we’re seeing is a privileging of those who sign up for more industrial muscle with the new middleman companies such who aggregate the work of podcasters, YouTubers, Instagrammers, Vine creators, etc. and optimize it for an advertising-supported world of content. – IP: Getting Value from your Creativity

Control of data is the new source of power in the network era. “Each of us has the gold and many companies feel they can simply take it. It’s time to empower ourselves and take our data back”, says Chris Middleton. Whether we socially own our data, or if it is capital for trade by third-parties, will be a key economic question our society needs to address.

The truth is we are living in neither a digital capitalist nor a digital socialist future just yet. We are poised between the two, but nearing the point where these two different viewpoints collide in a global conflict. Let’s call it the First World Data War. Forget religion, this is the real Great War of our age. There will be bloodshed, both figuratively and literally. – Diginomica

The democratization of our data, which is more and more the dominant form of the fruit of our labour, is a major issue for how wealth will be distributed in the network era. For now the platform capitalists seem to be winning. But society is waking up, with initiatives like the Ingenesist Project and Project VRM. We can use open source models to shut off the lights of big data. Many of us are leaving, or have left, the confines of hierarchical organizations of the industrial and information eras and are becoming mobile and global knowledge workers in a creative economy. But at the same time we need to prepare to assault the new walls already created by the platform capitalists. 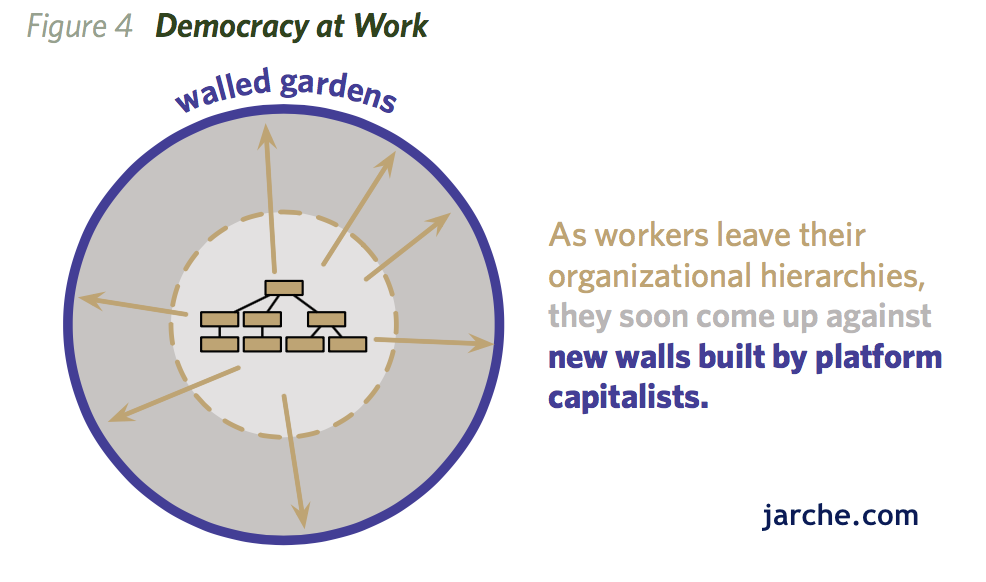 One Response to “it’s all about our data”