“Pass on what you have learned. Strength, mastery. But weakness, folly, failure also. Yes, failure most of all. The greatest teacher, failure is. Luke, we are what they grow beyond. That is the true burden of all masters.” —Master Yoda, Star Wars: The Last Jedi

Leading by allowing failure is a feature of all the strong female characters in the latest Stars Wars movie. These women rebuke several male characters, while still having positive feelings for them [apologies for the spoiler]. This type of leadership: listening, watching, understanding, and caring stem from our 90,000 year history in oral societies. Our written, print, and digital eras combined, have been much shorter. We should look to the deep past to understand the present and future.

“Swedish scientists have done extensive research on this and they found we first lived in small groups of 20 to 100 people who in any given week averaged 2.5 days for gathering and hunting and 4.5 days on talking. The conclusion they came to from this data was that the brain, the neurological system, and our hormonal systems have had 90,000 years of programming us for talk and collaboration, and only 10,000 years for competition and fighting.” —World Cafe 2007

The most viewed post in almost 14 years on this blog was on our future is networked and feminine. It concluded that certain leadership traits, perceived as feminine in our current age, are also seen as the most important.

I shortly followed up on this post because it received more negative feedback than normal. I tried to show that bias thwarts innovation. Innovation is a network activity and creating structural holes through gender bias (e.g. not promoting women into leadership positions) only weakens the network. Innovation is not brilliant flashes of individual insight but collective learning through social networks. Leadership is helping the network make better decisions, so managers should help to weave more diverse networks. 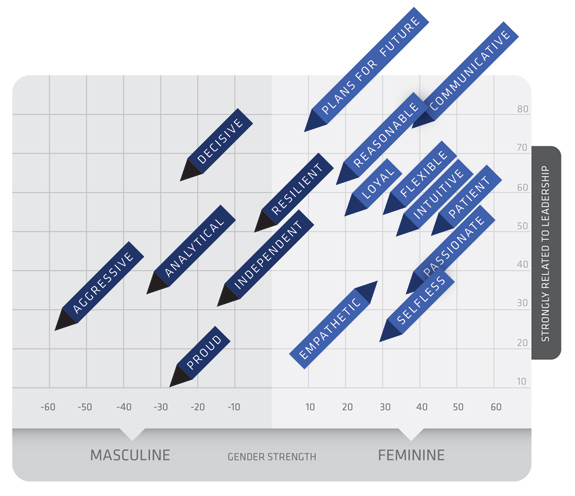 “32,000 study subjects were asked to classify 125 traits as masculine, feminine, or neutral. Another 32,000 were asked to rate the importance of the traits to effective leadership. ‘Feminine’ traits were more likely to be strongly linked to leadership.” Source: Inc. 2013

The Last Jedi shows a future with strong female leaders who do not try to usurp men but learn and work together to build on men’s general decisiveness and resilience. It’s a positive future, building on +90,000 years of evolution. First, we can work on changing our attitudes. A recent HBR article shows that, “our current image of who is a successful entrepreneur,  formed largely by the media and popular culture, conforms to a male ideal”. We collectively created these ideals and we can create new ones, together. If you think that male-dominated societies have always been the norm, check out the Mosuo:

‘Nearly every cultural norm is reversed. Unlike in the rest of China, where the sex ratio is grossly skewed in favour of boys because of selective abortion and foeticide, the arrival of a Mosuo daughter is a cause for celebration. It means the matrilineal bloodline will continue. And Choo [Waihong] is astonished to find that in this community her voice is ­automatically respected because she is a woman – not despite it. “At no time have I felt the need to fight against a tide of ignorance or open animosity towards woman-friendly issues.” Having stepped through the looking glass, her outlook on the world shifts. She is finally awake. It took “a matriarchal tribe to build up the feminist consciousness in my native heart,” she writes.’ —New Humanist 2017

2 Responses to “looking to the past for the future”