Social media extend emotion, obsolesce the linearity and logic of print, retrieve orality, and when pushed to their extreme result in constant outrage. A socially networked society could reverse into a popularity contest, where our value is only measured in our mediated reputation, such as numbers of Twitter followers or LinkedIn connections.

Our tribal leaders (religious, geographical, cultural), our institutions (political, religious, economic), and our markets (corporations, exchanges, trade deals) do not have the answers on how to live in a networked society. Only networked individuals, with positive intent, can determine how best to organize the next society. An aggressively engaged and intelligent citizenry can be an unstoppable force for change. But these citizens have to understand the new media landscape.

“The new media won’t fit into the classroom. It already surrounds it. Perhaps that is the challenge of the counterculture. The problem is to know what questions to ask.” —Eric McLuhan

New media change how we connect.

“Ridiculously easy group-forming matters because the desire to be part of a group that shares, cooperates, or acts in concert is a basic human instinct that has always been constrained by transaction costs. Now that group-forming has gone from hard to ridiculously easy, we are seeing an explosion of experiments with new groups and new kinds of groups.” —Clay Shirky

“A new form of information manipulation is unfolding in front of our eyes. It is political. It is global. And it is populist in nature. The news media is being played like a fiddle, while decentralized networks of people are leveraging the ever-evolving networked tools around them to hack the attention economy.” —dana boyd 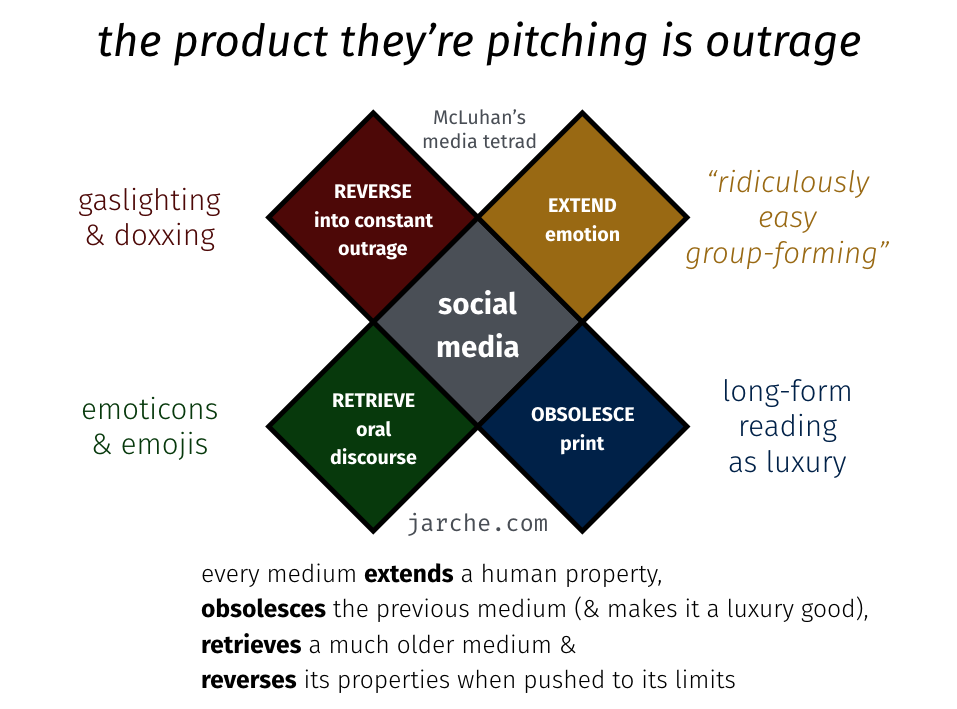 Marshall & Eric McLuhan’s Laws of Media (1988) provide us with a way to understand the effects of these new social media. They have been around long enough that the major platforms are already extended to their limits and are reversing their intended effects, hence Twitter is dealing with bots and trolls and Facebook tries to deal with lies and fake news.

Marshall McLuhan stated that “At electric speed, all forms are pushed to the limits of their potential.” On social media, especially Twitter and other short forms of posting, the written word gets pushed to its limit and reverses to a new form of orality. This shift in communication is of importance to all of us. 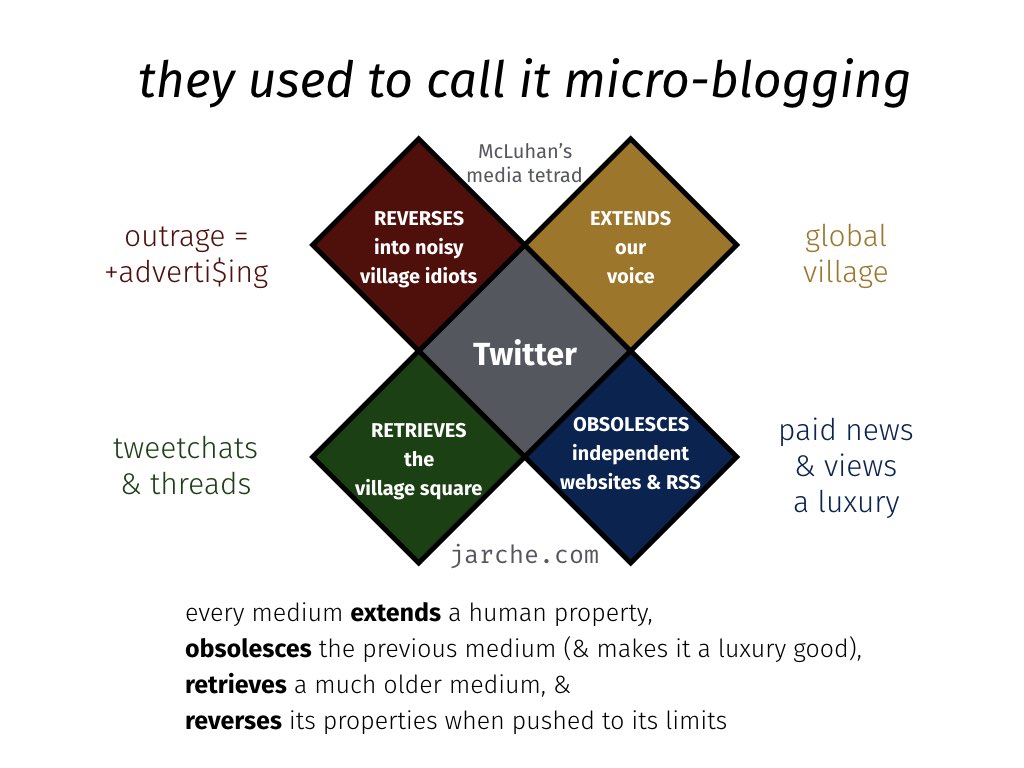 Let’s take a look at what these media are obsolescing and turning into luxuries — long form reading, private connections, paid news, private communities. To counter the platform monopolists, the public and social sectors can offer these ‘luxuries’ to all citizens as a public good. Therefore, instead of partnering with Google for smart cities, government can be funding more public libraries and accessible virtual spaces for communities to gather. If we understand the tetradic effects of these new media, we can take steps to counter them. 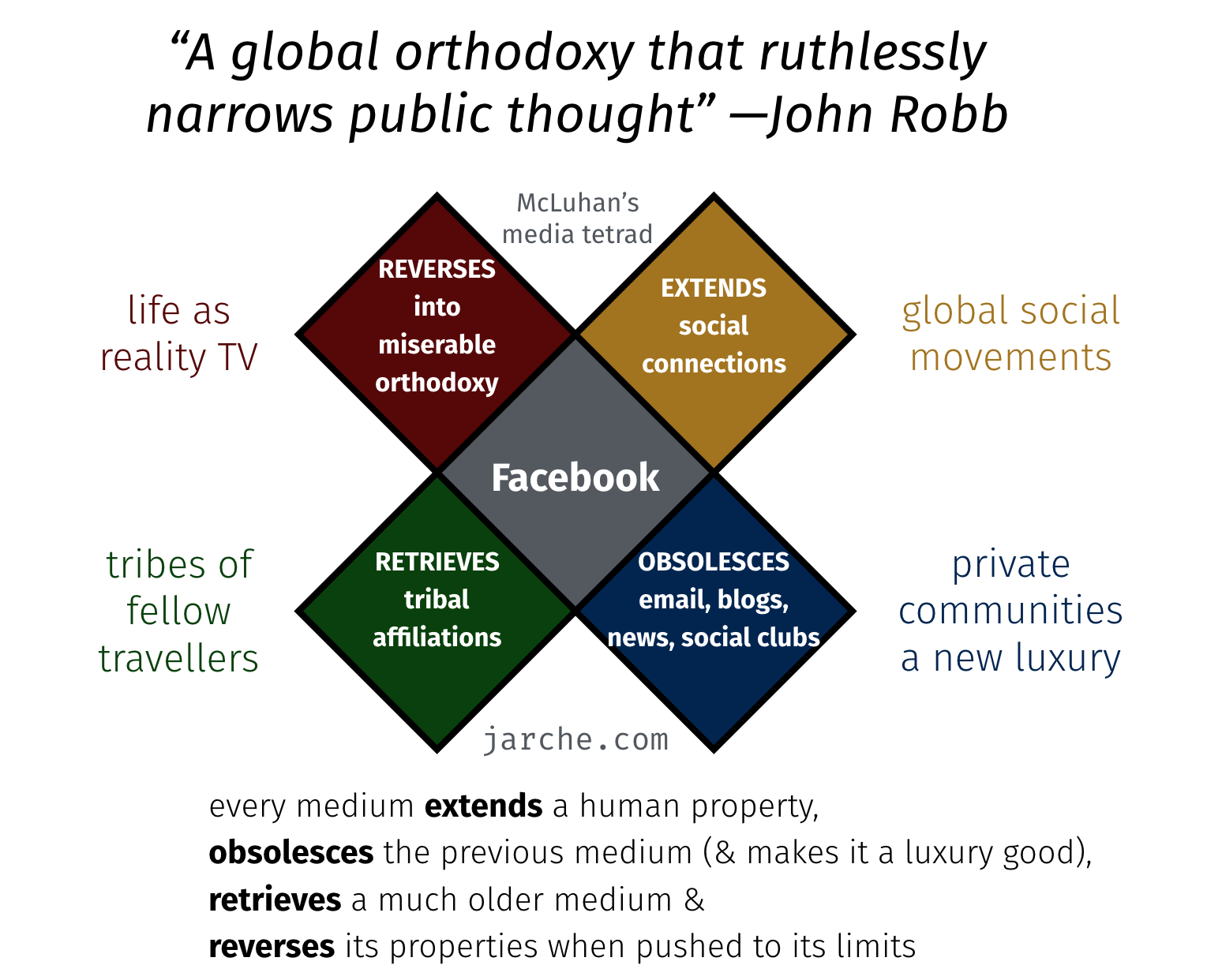 The reversals are already evident — corporate surveillance, online orthodoxy, life as reality TV, constant outrage to sell advertising. The tetrads give us a common framework to start addressing the effects of social media pushed to their limits. Once you see these effects, you cannot un-see them. 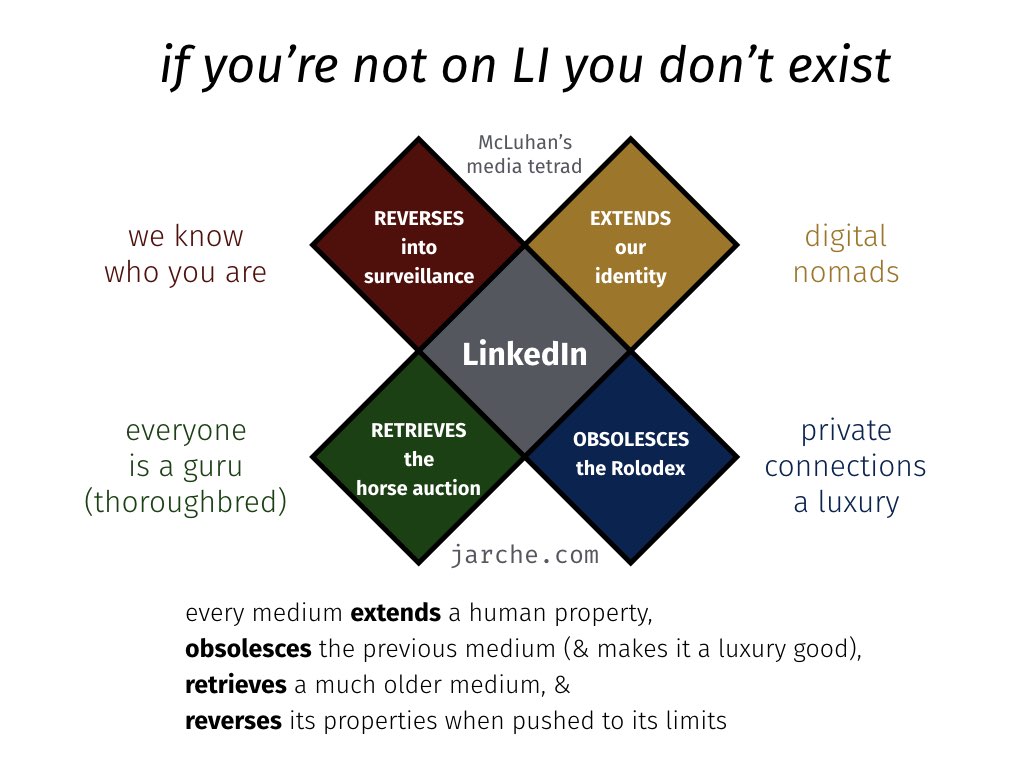