“I know not what answer to give you, but this, that Power always Sincerely, conscientiously, de très bon Foi, believes itself Right. Power always thinks it has a great Soul, and vast Views, beyond the Comprehension of the Weak; and that it is doing God Service, when it is violating all his Laws.” —John Adams to Thomas Jefferson

In a 2007 presentation — covered by ICTology — Graham Attwell discussed the future of schooling in view of online personal learning environments, concluding that, “The role for teachers will be mediating, engaging, monitoring, helping, motivating …” He further commented, “Not that assessment is a thing to avoid, but it should be taken outside the learning process. On the other hand, self-assessment is reflection and thus becomes part of the learning process”. Given that many students are learning online these days, these are good ideas to be reconsidered for education, and for training.

In several discussions with educators 15 years ago I concluded that one incremental change that could have positive results for learning in formal settings is to remove teaching from assessment.

Whether it be in public school or higher education, teachers should be there to help the learners. Others, who design and administer the tests must show how these tests are valid and reliable and be able to publicly defend the principles upon which they are based. When, or if, learners are tested, teachers are advocates not judges.

By removing the role of assessor, we can do a lot to advance learning. This does not require a wholesale dismantling of the system but is a pragmatic start.

The mantra of education should be — Those who teach will not test.

Brian Alger suggested many years ago that curriculum is confinement.

Curriculum is developed by those in power. Assessment is an overt demonstration of that power (emphasis added).

“The issue of privilege brings us to this most central of dilemmas, one that we must all, both the testers and the tested, come to terms with: At every level of analysis, assessment is a political act. Assessments tell people how they should value themselves and others. They open doors for some and close them for others. The very act of giving an assessment is a demonstration of power: One individual tells the other what to read, how to respond, how much time to take. One insinuates a sense of greater power because of greater knowledge (i.e., possession of the correct answers). The political dilemma is a problem for all students, but it is particularly acute for students from diverse cultural, linguistic, and economic backgrounds whose cultures, languages, and identities have been at best ignored and at worst betrayed in the assessment process.” —Assessment and Diversity, Georgia Earnest García, P. David Pearson, 1994

Consider the UN Convention on The Rights of the Child (1990). Article 13 states — “The child shall have the right to freedom of expression; this right shall include freedom to seek, receive and impart information and ideas of all kinds, regardless of frontiers, either orally, in writing or in print, in the form of art, or through any other media of the child’s choice.”

Curriculum limits the information and ideas that can be sought. Assessment limits freedom of expression. It’s time for a change. 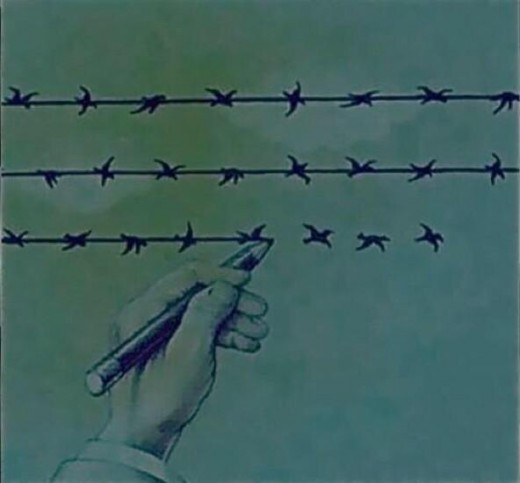 “The difference between freedom and slavery is one thin line.” —@therealbanksy

One Response to “schooling unbound”