Work today (and tomorrow) requires more creativity and less formulaic intelligence and it also requires less of “us”. That’s less of our dedicated, full-time attention, with contract work becoming the new normal:

Littler Mendelson, one of the largest employment law firms in the country, predicted in a report last year titled “The Emerging New Workforce” that 50 percent of new jobs that emerge after the recession will be contingent positions, and as a result “as high as 35 percent of the work force will be made up of temporary workers, contractors or other project-based labor.”

Full-time work has not been the ticket to the good life for several decades:

The prolonged period of economic prosperity that Canada has enjoyed resulted in a 72-per-cent increase in economic output between 1975 and 2005, growth that has continued since, it [the Canadian Centre for Policy Alternatives] noted.

The benefits of the growth, however, have not been reflected in workers’ paycheques, it added. “Canadians’ average real wages, which are wages adjusted for inflation, have not increased in more than 30 years.”

In a networked, knowledge-based economy where initiative, creativity and passion trump intellect, diligence and obedience; being “at” work 8 hours a day makes little sense. The Internet makes “time at work”, an antiquated notion. It also makes many of our traditional management and personnel policies irrelevant. The recession has only amplified this trend. 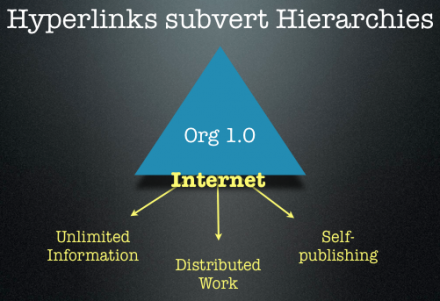 What can we do?

Most intelligent people know that there is no such thing as a job for life. Corporations have shown that loyalty to the enterprise does not work both ways. Organization should look at how they can structure to take advantage of these workplace changes. The first part is to stop thinking like a hierarchy, with titles and reporting relationships, and start framing the enterprise in terms of networks. Mapping value networks is a start, as is talking about social networks and supporting them through the use of social media. If you look at work differently and talk about it differently, then new conversations and attitudes will result.

Here are some ideas, for starters:

Abolish the organization chart and replace it with a network diagram.

Move away from counting hours, to a results oriented work environment

Encourage outside work that doesn’t directly interfere with paid work, as it will strengthen the network

Provide options for workers to come and go and give them ways to stay connected when they’re not employed. Build an ecosystem, not a monolith.

4 Responses to “Let’s talk about work”