Here are some of the observations and insights that were shared via social media during the past two weeks.

@LucGaloppin – “If we’d look at digital communities as a life insurance for our own learning, exactly how would that influence our participation?”

@NielsPflaeging – “Learning is that process that continuously makes you think: How could I have been so dumb 14 days ago?”

@DavidGurteen – “PKM is actually what KM is really all about.”

10 years of lying up the hierarchy – via @PeterVan

We should have taken our managers, chief executives, politicians, civil servants and funders to see what was actually going on. We should have persuaded them to sit on council receptions for days at a time, to listen to hours of phone calls from the public and to understand service users in their own contexts. Only then would they begin to understand the true performance of the organisation. Performance officers do not need to spend whole days tinkering with text and formatting reports, mediating reality into something palatable. There is no need for an expensive bureaucracy between the decision makers and the truth.  Confronting the brutal facts is free.

What does a ‘No Fire’ policy change? Everything. – via @StoweBoyd

Probably the biggest impact was the effectiveness of performance evaluations. Development discussions were usually wrought with skepticism from the employee standpoint — are you really trying to help me or just documenting material to potentially fire me? Since getting fired wasn’t an option, everyone became more open to talk about their real problems. Performance evaluations became what it was always intented for – development discussions, open, honest and often real and raw conversations on what people are struggling with. Since people could voice real concerns at work, they left those toxins there and didn’t take them home with them. Home life improved as well. – Charlie Kim

The Guardian: Increasingly, corporations and politicians treat the poor with distrust.

Inside Amazon’s flagship factory in Rugeley, Staffordshire, a new way of working is evolving. There is a strong topnote of distrust, evinced by the full-body scanners that workers have to pass, every time they leave, to prove they haven’t stolen anything. The profound insecurity built into the employment model is dressed up as discipline – which is to say, Amazon expects huge seasonal fluctuations in the number of people it needs, yet likes to mask their dismissals behind a misdeameanour, so a lot of people get axed for crimes like being ill. There’s a lifesized blonde lady made of cardboard at the entrance, with a think bubble coming out of her head that says, “This is the best job I’ve ever had!” If that detail alone is enough to make your blood run cold, marry it to the testimony of the chairman of nearby Lea Hall Miners Welfare Centre and Social Club: “The feedback we’re getting is that it’s like being in a slave camp.” 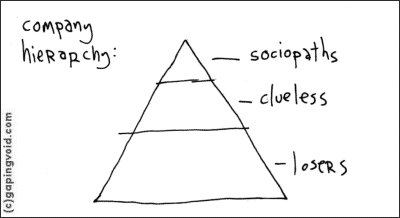 So, what’s going to replace bureaucracy and markets?

We don’t have digestible names for them yet.  However, let’s just call them few to many (F2M) systems and P2P systems.   F2M systems are run by a few people and delivered to a great many people.  In contrast to broadcast, these systems are interactive and smart.  Many use software bots to gather and process data 24/7.

P2P systems allow ad hoc interaction between indepedent individuals.  Every node in this type of system is an equal to any other.  They are not dependent on each other.

Both types of systems have value.  Both have problems.  Both are immature.  As we move to an information based global economy, we’ll see these systems increasingly dominate the playing field (to the detriment of bureaucracy and markets).

One Response to “Notes on learning and working today”