Listening to a story about exploitation in the ivory tower on CBC Sunday Edition this morning made me realize how much we are prisoners of our current reality. The poorly paid contract teaching staff saw no way out of their plight and the professor-turned-administrator went from questioning the current system to promoting its inequalities as the only viable way to keep universities afloat. It seems that as soon as you identify with a system, whether it is good for you or not, then it becomes the only frame of reference. There was no discussion on what systemic changes could humanize the life of sessional instructors. Everyone sounded so powerless.

The situation of universities in this country, with high fixed costs and deep bureaucracies, is not that different from any other institution, including the private corporation. People on all sides inside the organization can only imagine how to tinker with the existing system. But the system is the problem. The radio program noted that one university has over 50% contract staff, who earn about 1/3 what tenured faculty do, and have almost no hope of permanent employment. Something as simple as only hiring new tenure-track positions from the pool of sessionals could flip this situation. It is a small, simple change that at least one university could experiment with. But it seems that administrators are not hired for their ability to experiment, and neither are faculty, outside the lab anyway.

A fundamental shift in organizational design is needed, beginning with organizational leadership. Those in positions of power need to understand complexity, the default state of  most situations they face, and will be dealing with for the foreseeable future. They need to work on the system, not in the system. This is social leadership, a requirement for success in the network era. Social leadership needs network thinking, which is as difficult as learning a new language for adults.

The inability to understand complexity is the problem facing almost all large organizations. It is next to impossible to have a deep and meaningful conversation about complexity, and the new world of work in a networked society, inside the traditional workplace. It requires a common language, some shared experiences, and a willingness to think critically and abandon some very comfortable assumptions that inform our understanding of ourselves and our work. It is very tough to do this in one hour briefings, powerpoint decks, or elevator rides. There is too much to digest. I noted that time for reflection is missing in most workplaces today. Even more rare is time for sense-making, and sense-making takes a LOT of time, for example:

If networks really are the new companies, and I believe they are, then there is a lot of sense-making required to build the new value structures for the networked economy. Creating the time and space for continuous sense-making is a cornerstone to building the organizations and management structures for our collective future. Now would be a good time to start. 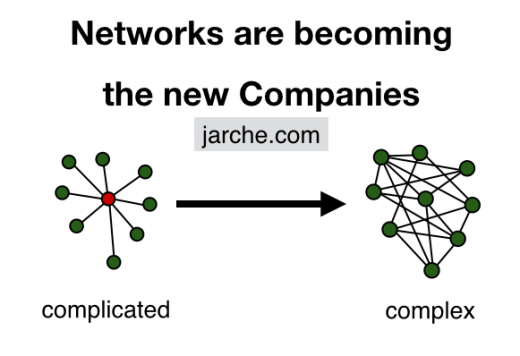 2 Responses to “Create space for sense-making”