Return of the Vikings

I have had the privilege of working with several Nordic organizations over the past few years — Carlsberg, HR Norge, Implement Consulting, Snow Software, Prime Minister’s Office of Finland. Over the past 14 years of writing on this blog I have advocated for more transparent work, temporary & negotiated hierarchies, and willing cooperation between interdependent workers.

The network era is obsolescing many artifacts of the industrial market era — rigid hierarchies, master/servant work relationships — and retrieving aspects of previous eras — tribal affiliations, oral communication. We can learn from the past and the authors of Return of the Vikings: Nordic Leadership in Times of Extreme Change, provide us with a compass to see our way into an unknown future. It is the same compass that guided the Vikings across the North Sea, to Iceland, and then to North America.

Nordic leadership is based on the Nine Noble Virtues — Courage, Truth, Honour, Fidelity, Discipline, Hospitality, Self-reliance, Industriousness, and Perseverance. There is a chapter dedicated to each virtue including interviews with people who have exhibited or witnessed these in modern times. While the compass remains steady, each person finds their own path, and in so doing contributes to the collective. Nordic leadership is servant leadership. It can be summed up as — inclusive, trusting, and collaborative.

“History is always a source of knowledge and information about how to address the present and prepare for the future. The Vikings dealt with great complexity in their navigation of the seas, both previously known and unknown, and in their interactions with the people they encountered on their travels. They developed political and legal systems, and nurtured close-knit communities that were networked over large expanses of land. In their military and seafaring methods, they established great levels of efficiency and effectiveness with reasonably small numbers, profiting from their endeavours, establishing new trade relationships and garnering diplomatic and military respect. In the role played on the global descendants we find echoes of their success. In the current era of great uncertainty and extreme change — exacerbated by complex issues like climate change, mass migration, population growth, longevity of life, economic instability, terrorism and regional warfare — there are lessons for all of us to be found among the modern Vikings and their medieval forbears.”

The authors, Chris Shern & Henrik Jeberg, interviewed over 40 people for this book. I have been connected with some of them on social media — Birgitta Jónsdóttir — and have met or worked with others — Esko Kilpi, Kenneth Mikkelsen, Melanie McCall. Also, Richard Martin did an excellent job in putting the narrative together. I hope to meet more of these people in the future as I have little doubt that the principles of Nordic leadership are an excellent counterbalance to the sociopaths we often meet in modern organizations.

The book is about leadership in times of extreme change. At page 185 I reconfirmed that my own work is quite well aligned with Nordic leadership.

“What Nordic businesses, large and small tend to demonstrate are high levels of responsiveness. Their open cultures mean that they are generally able to resist the rigidity and ossification that can affect ageing or expanding organizations. In the mobile technology, app development and computer software industries, all of which are prominent in the Nordics, there is a cycle of development and testing that often involves representatives from the target users of these products and services. This can go through many iterations, with the penultimate known as beta testing. Canadian consultant Harold Jarche contends that in the era of digital networks, in order to remain relevant and responsive, we have to maintain a state of ‘perpetual Beta’.”

As Henrik Jeberg says, “It boils down to three things: mutual trust, openness, and low power distance.” Does your organization exhibit these traits? If not, buy this book. Nordic leadership is a better path to the future for progressive, democratic societies. 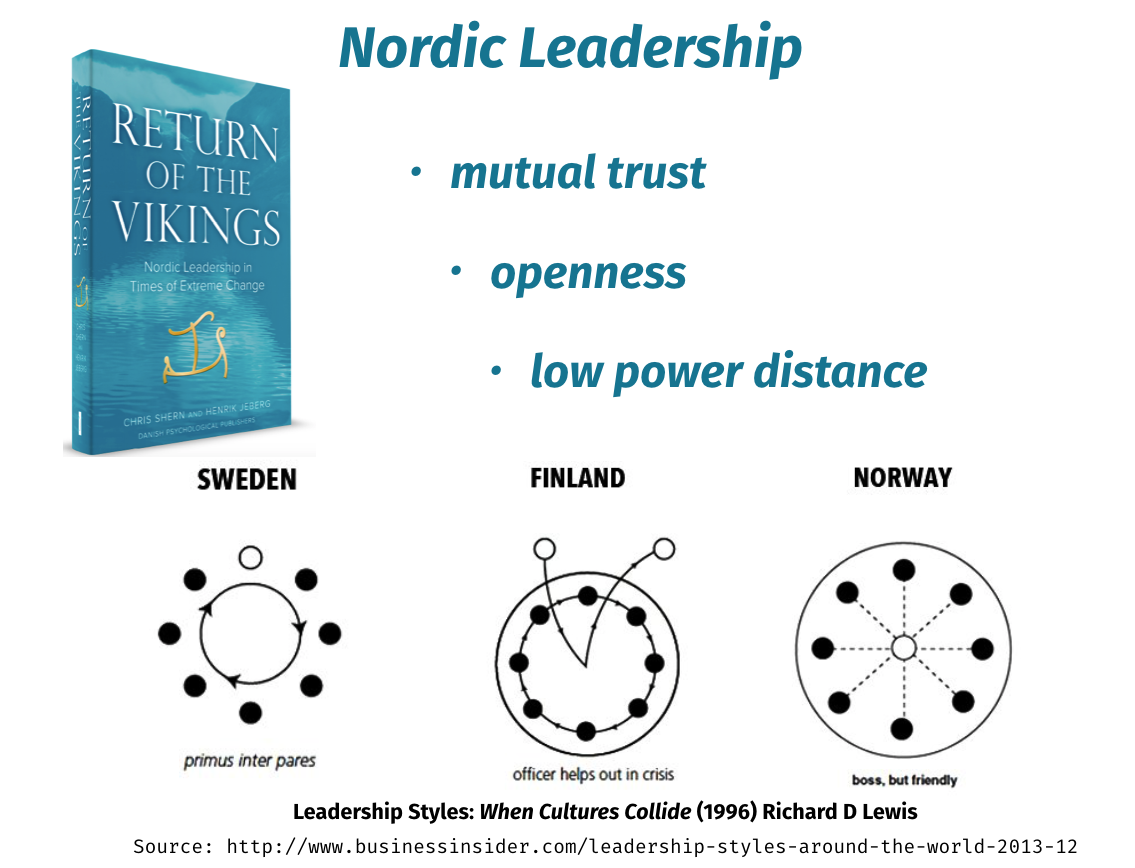