“You’re just hearing about it [microaggression] more, because the people who have been suffering it for a long time have decided that they aren’t going to suffer it anymore. The disempowered recognize that it’s time for them to be heard.

Social media gives them a platform to broadcast that message for the first real time in history. Prior to a decade ago, they’d have to find some way to get their message out through media dominated by the very people who were looking down on them and oppressing them. The democratization of media gave them an equal playing field now.” —Peter Kruger, on Quora

Last year I wrote a series of posts on the retrieval of feminine characteristics necessitated by a network society. This started with the future is networked and feminine, the most viewed post I have ever written here.  It was summed up in retrieving gender balance, a much less controversial title. My intent with these posts was to show how diversity is essential for innovation, and ignoring or sidelining 50% of the population is just plain stupid. Heather McGowan gave some positive feedback which I appreciate, given my own privileged position in society.

The quote from Peter Kruger above shows how the nature of a network society is opening up conversations that were kept quiet in the mainstream. Broadcast media silenced marginalized groups. I have said that the closest I can get to understanding what it means to be a marginalized person is by cycling in our automobile-centric culture. Peter Kruger shares that perspective.

“I recently read a great article about how a man discovered the nature of privilege by becoming a bicycle commuter.

The nature of modern, paved roads in the US, the nature of our transportation system, is set up to advantage automobiles, and disadvantages anyone not in an automobile. If you’re on a bike, you’re unprotected while dozens of tons of steel whiz by you at multiple times your rate of speed.

Often, those cars show you no regard whatsoever. They don’t slow down. They don’t move over for you. It’s not that they’re out to get you, it’s that they actively don’t care — because the structure and nature of those roads advantages them in such a way that they don’t have to. They’re just not even paying attention to you at all.” —Peter Kruger, on Quora

Cycling allows me to see what many cannot — an outsider’s perspective. As Kurt Vonnegut wrote in Player Piano, “Out on the edge you see all kinds of things you can’t see from the center.” We all need to get out on the edges to see more clearly.

Social media do not have to be echo-chambers. We can use them to better understand and empathize with people not like us. To do so we have to know their limitations and the nature of each medium. One issue with Twitter and Facebook is that they are largely print media but they feel like oral media. Marshall McLuhan said that, “At electric speed, all forms are pushed to the limits of their potential.” On social media, especially Twitter and other short forms of posting, the written word gets pushed to its limit and reverses to a new form of orality. We need to understand this. It’s not taught in schools.

This year — 2019 — I would encourage everyone using social media to spend some time understanding their inherent nature. You may think you are being funny, insightful, or witty, but the medium is the message. What you say in your mind is probably not what I read in your tweet.

With marginalized groups — who were muzzled for years — now using social media, it is important to first listen for understanding before making any comments. And when you do comment, choose the best medium. Find a community of practice to test your ideas in a trusted space before broadcasting them on social media. Every medium has more than one side. Democracy is messy. The democratization of media is even messier. 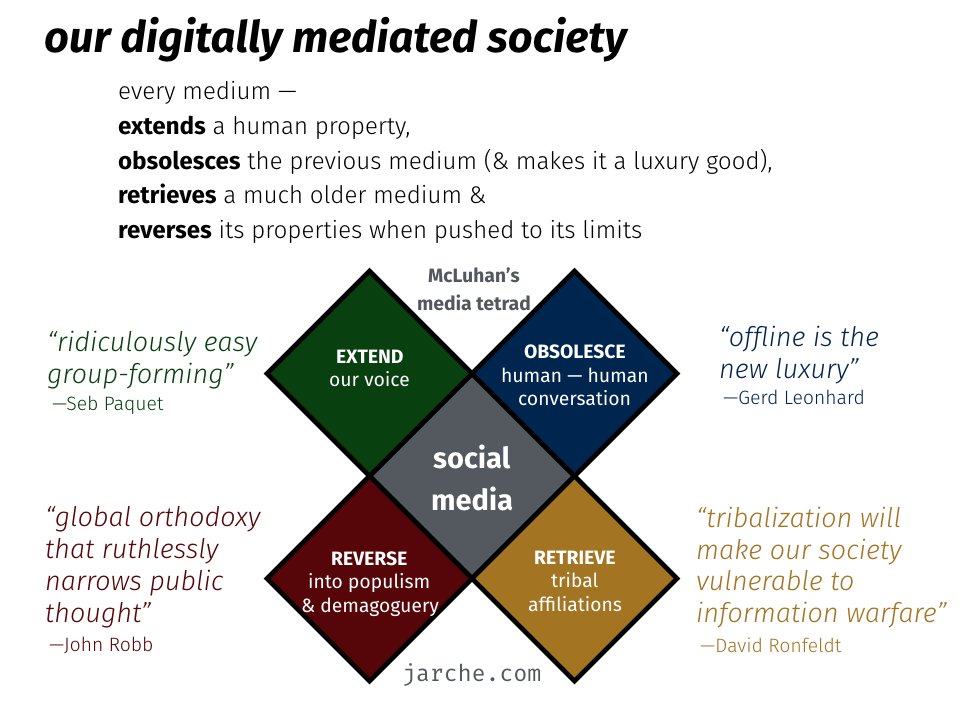