When the pandemic broke out, the situation was generally chaotic and the best response was to act firmly, such as establish a lock-down as soon as possible.

“In the chaotic domain, a leader’s immediate job is not to discover patterns but to stanch the bleeding. A leader must first act to establish order, then sense where stability is present and from where it is absent, and then respond by working to transform the situation from chaos to complexity, where the identification of emerging patterns can both help prevent future crises and discern new opportunities. Communication of the most direct top-down or broadcast kind is imperative; there’s simply no time to ask for input.” —Snowden & Boone, HBR 2007

Now the pandemic is in its sixth month. We can make some sense of it, even though much is complex. The best response therefore is to probe — the Cynefin framework calls for those in positions of decision-making to probe, sense, and respond, using safe-to-fail experiments. A reductionist approach will not work in the complex domain.

At this time many decision-makers have assumed that the situation is only complicated, and that we can make sense of the relationships between cause and effect. I am certain we cannot.

Those who see the situation as complicated are deciding to have blanket school openings and single policies for all to follow. These are not probes — they are gambles. Never bet the farm against a complex adaptive system. It’s why most small farmers diversify their crops, and why big agriculture often has big failures. I have had many health warnings from the latter, but none from the former.

Where to now? All organizations have to experiment and learn their way ahead. It may not be a ‘new normal’, but it will be new. Learning fast and learning from others are essential now. Contexts differ, so single solutions won’t work, but some things really are complicated, not complex. For example we know that wearing masks reduces viral transmissions, so this is a good practice that can be replicated widely. We don’t know what happens when your university re-opens to 10,000 students. It would be best to probe and experiment, to develop emergent solutions, before doing so.

First accept that you don’t know where you are. Then work at knowing where you are and confirm your assumptions and biases. Only then use the best approach to make sense of the situation.

I have referred to Cynefin many times here and look forward to a deeper dive with Dave Snowden on our learning & sense-making in uncertainty and continuous flux sessions, beginning 30 September. Because now most of us have to become better sensemakers and the best learners we can be. 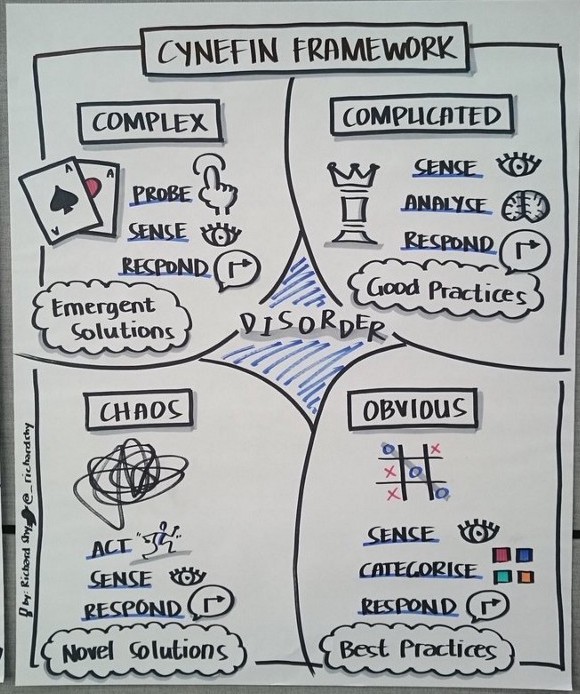 One Response to “sensemaking in uncertainty”