While many of our professions and organizations can deal with some complexity, few are adapted to deal with chaos on a large scale. Chaos — violent political action, climate change, pandemic — requires structures that promote curiosity and resolve. With frequent chaotic events to deal with we have to organize in temporary, negotiated hierarchies that can quickly form and re-form in order to test novel practices. The ability to do this requires diverse thinking, open structures, and trust among those doing the work. So I concluded in our wake-up call in June.

Six months later and what have most Western democracies learned? Not much. In the USA, EU, and Canada, half-measures continuously get added to already complicated and difficult-to-understand protocols. Instead of stopping the ship-of-state and taking it into dry-dock for a refitting to deal with a viral sea, we are haphazardly patching the vessel and missing what is below the water line.

Meanwhile the second wave of the coronavirus is bigger than the first wave. Governments are focused on a technological fix — vaccines — while providing little leadership and poor communications to their citizens. As Boss Godfrey says in Cool Hand Luke, “What we’ve got here is failure to communicate.” Yes we do, as Professor Devi Sridahr described the situation in the UK.

“Creation of complex rules (with numbers of people, households, exceptions) varying by tiers, has created a perverse system where people look for loopholes. Instead, focus on why this virus is risky, what we can all do to avoid getting it, and passing it on, and the underlying science.”
“Simply: transmits in indoor, poorly ventilated & crowded settings. Don’t go into other people’s homes. Keep distance, meet outside, & err on the side of caution. While older/vulnerable more at risk of dying, younger people can get seriously ill. Russian roulette with health.”

Perhaps the clearest advice came early in the pandemic, and went unheeded by most governments. Doctor Michael Ryan, Executive Director of the WHO Health Emergencies Programme spoke in a press briefing on 19 March 2020.

“If you need to be right before you move, you will never win. Perfection is the enemy of the good when it comes to emergency management. Speed trumps perfection. And the problem in society we have at the moment is that everyone is afraid of making a mistake. Everyone is afraid of the consequence of error. But the greatest error is not to move. The greatest error is to be paralyzed by the fear of failure. I think that is the single biggest lesson I’ve learned in Ebola responses in the past.”

Understanding what domain of complexity we are dealing with is now an essential requirement for decision-makers. At its outbreak the pandemic was chaotic and required immediate action. Developing vaccines went from complex to complicated. Dealing with people and how groups react to the pandemic oscillates between ordered and unordered domains but has mostly been complex. Clear and simple communications can help to avoid confusion. As Doctor Trish Greenhalgh advised this week:

Over the holiday season, take a look at Martin Berg’s festive rendition of the Cynefin framework showing the five domains — Confused, Clear, Complicated, Complex, and Chaotic. There are times for action and times for analysis. It is becoming critical to know when is the right time for each. 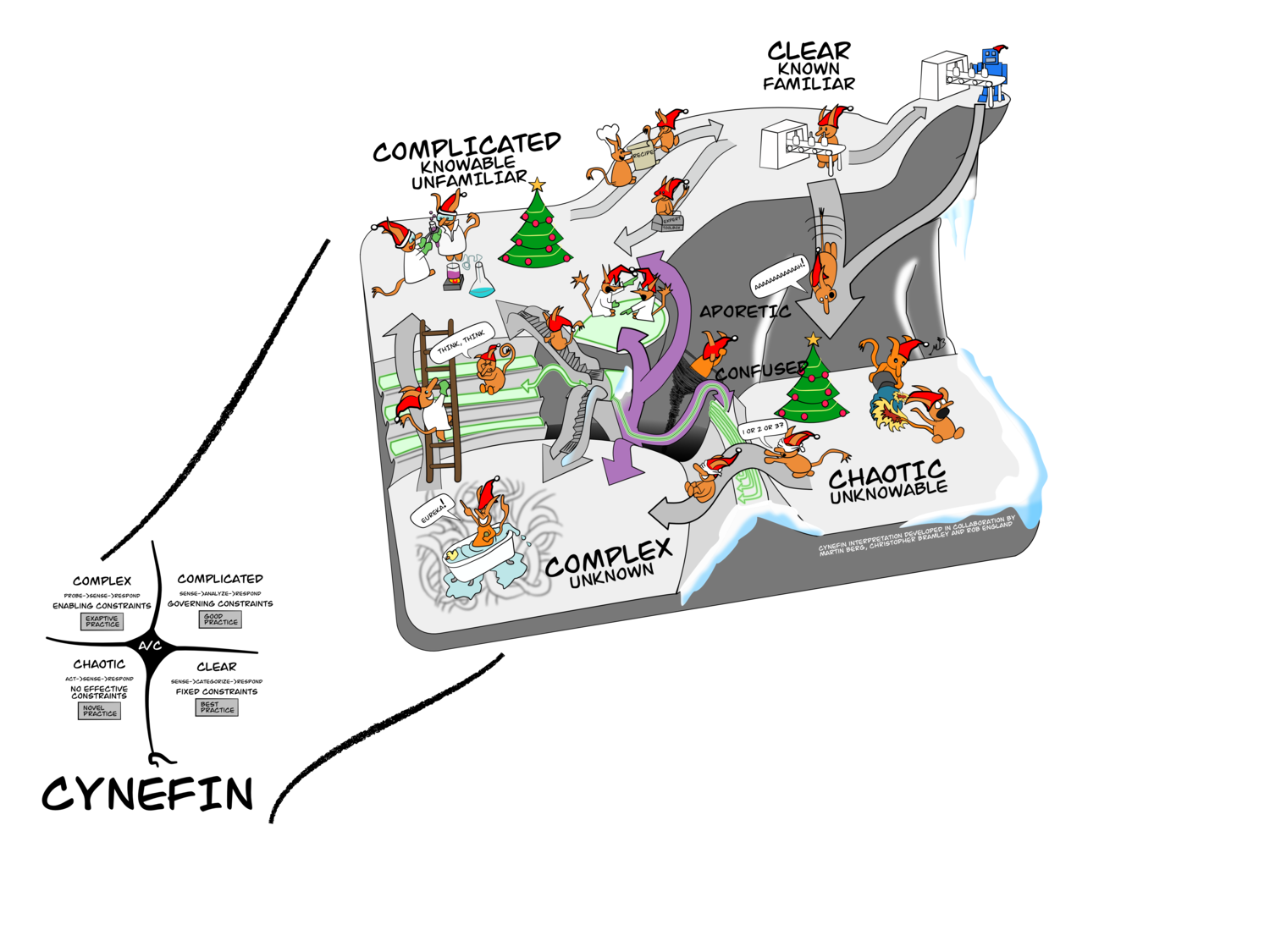 One Response to “sometimes perfection is the enemy of the good”