Slovakia’s president, Zuzana Caputova, was elected in March 2019, and surprisingly showed a way out of the populist quagmire that many countries find themselves in. The tribal affiliations retrieved by the previous corrupt government, particularly via social media, were what Caputova had to counter in order to get elected.

She addressed these tribes not by creating a new tribe, but by discounting the tribal perspective and focusing on the population’s common humanity instead. In this case, it worked. Understanding The Laws of Media, especially the retrieval quadrant gives us a tool to counter the negative effects — or potential reversal — of new technologies like social media. This is real media literacy. 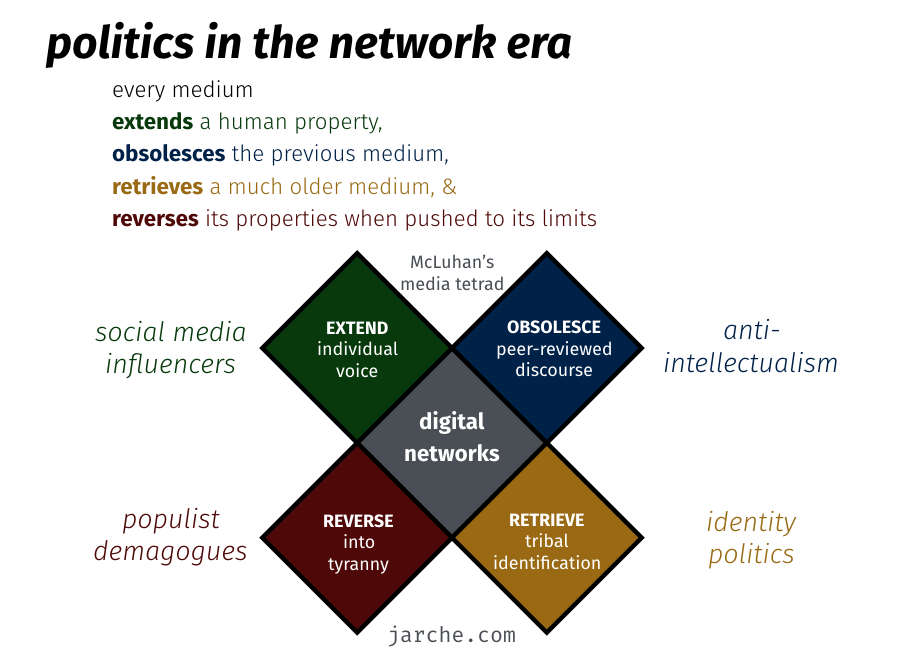 However, this kind of media literacy and critical thinking does not correlate with our current education systems. They do not teach these skills. For instance, what was the composition of the insurrectionists on Capitol Hill in Washington, DC on 6 January?

“There were plenty of graduates and good students in the mob that day. Plenty of dropouts and poor students looked on in horror. And as much as the right’s critics might prefer an understanding of what’s happened to our politics that flatters their intelligence, the challenge we’re facing isn’t that millions of hapless and benighted yokels have been bamboozled by disinformation. It’s that millions of otherwise ordinary people from many walks of life—including many who went to and even excelled in college—have a material or ideological interest in keeping the Democratic Party and its voters from power by any means possible. And those means include the utilization of narratives, including conspiracy theories, that delegitimize Democrats and offer hope of their eventual comeuppance.” —The New Republic 2021-02-05

Is the problem with our formal education systems?

I have previously discussed what they don’t teach at university, but should. We live in a network society. It is now possible to find mentors, fellow seekers, or knowledge catalysts in almost any field. The only constraints are time and some guidance. Faculty should be able to model the behaviours of engaged network learners. If they cannot, they should not teach. Students can learn through cognitive apprenticeship, connecting to external communities and professional networks over the course of their studies.

But universities and colleges are not doing this. They are feeding content but are not promoting critical thinking, either on the left or right of the political spectrum. Neither side knows where to start in understanding the other side. Perhaps collaborating with the enemy with its ‘stretch collaboration’ should be a compulsory subject, taught by practitioners not academics. 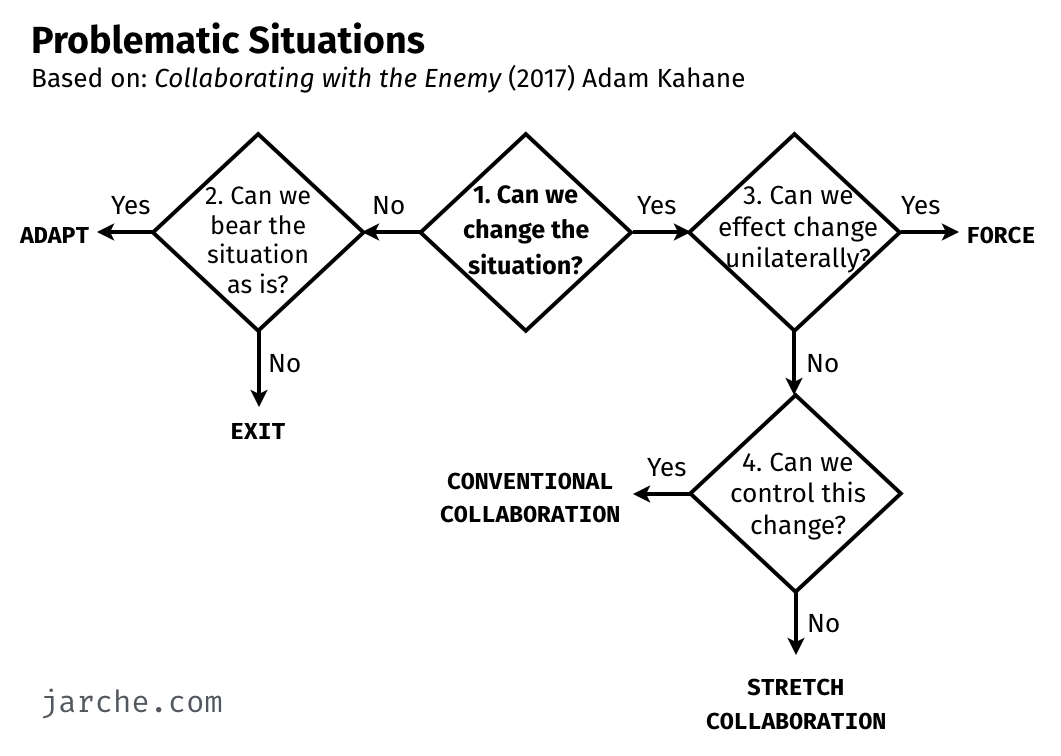 Our society is currently addressing its first major pandemic in a century and an impending Great Reset of the economy. Collectively we need to improve our sensemaking skills. Mastering a single field is not enough. It is time to change the world. Personal knowledge mastery — PKM — is one framework that has been used in higher education to shift the emphasis from mastering content INSIDE schools to making connections OUTSIDE schools.

“We actually faced a few challenges in helping the students warm to PKM. It seemed that many could not see the reason why they had to do PKM, and also that many struggled to catch the vision of how to do it. A lot of students had expected higher education to involve memorising information to pass exams, as they had previously done in school. PKM did not have that same type of measurable outcome and many students would ask me what exactly it was they needed to do to pass the class … Perhaps PKM is the difference between higher education and that of the typical high school.” —Chris James Barker

Even highly educated people can be bigots, racists, and misogynists. Higher education has an opportunity to expand its disciplinary silos so that graduates not only know how to learn but they know how to relate to people from other perspectives, with other experiences, and with differing views on politics and religion.

As I wrote in retrieving the cooperative imperative — we are all on this planet together and it’s now our common prisoner’s dilemma. Cooperation starts by seeking to understand others, not to prove that our position is right. 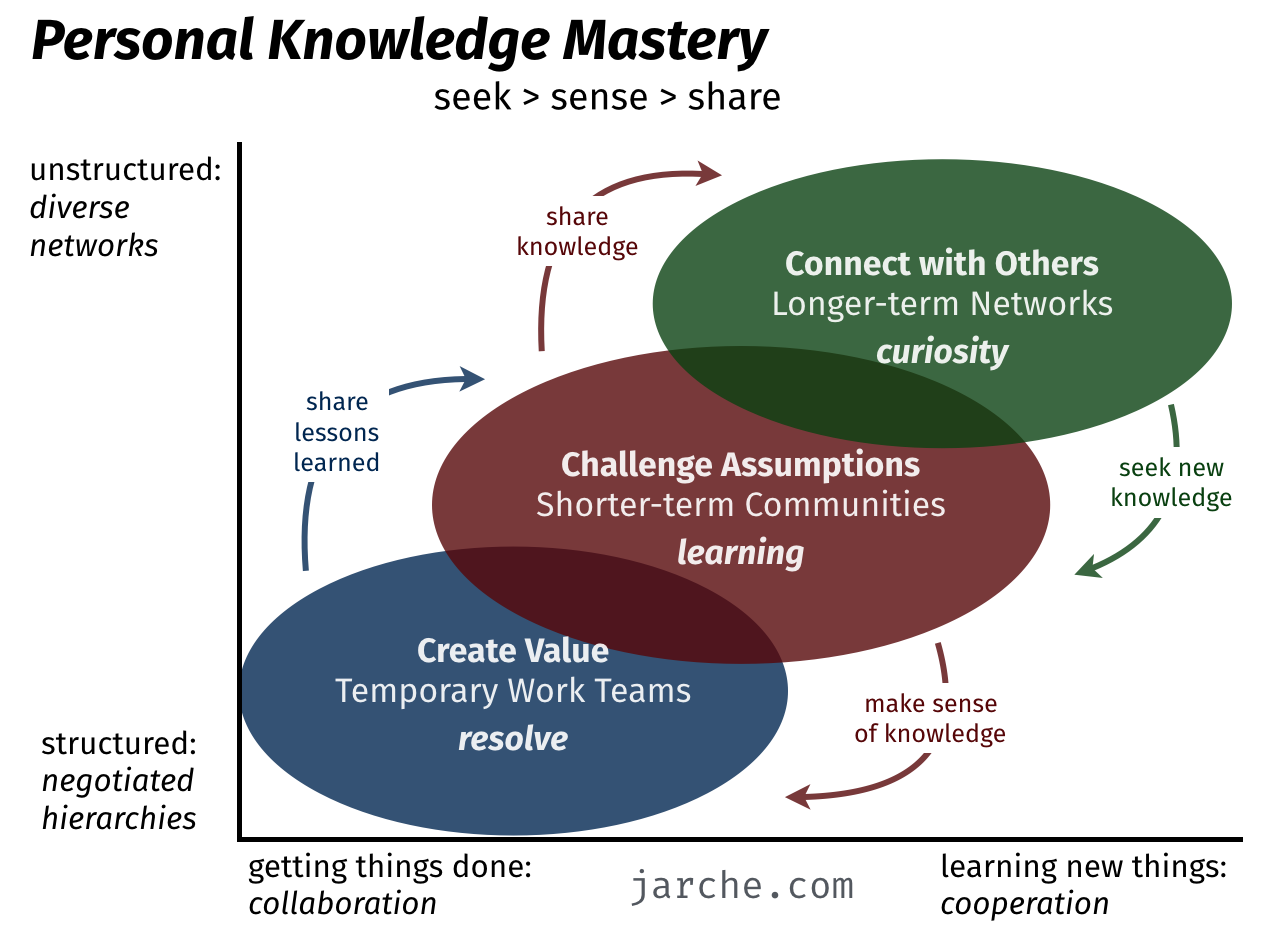