In the +20 years I spent in the military, much of it was as a student on course. In the military there is a whole system that governs individual training, in our case it was CFITES.

CFITES comprises several volumes of instructions, including all of the ADDIE steps. A lot of resources are put into preparing individuals for duty and the system is designed for large numbers. Much time and effort goes into training a soldier and in peacetime there’s not much other than training to do anyway. If in doubt – train. Military Instructional Systems Design (ISD) has greatly informed and inspired civilian training. Frameworks such as the Systems Approach to Training, developed by the military, have over the years been adopted and adapted by corporations and government agencies.

Groups of soldiers who will work together usually participate in “collective training” and this typically follows some kind of cycle of preparing for operations, performing missions and coming back from missions. During the preparation phase, units work through the types of operations they think they might have to do. These are scenario-based rehearsals of varying intensity. For instance, one group exercise may solely focus on communications systems and processes.

However, the military has a distinct advantage over business when it comes to collective training. The military is not always on operations. Due to the tempo of operational duty, soldiers need to come back and recuperate and this is when training can be conducted. Business, on the other hand, cannot afford to take staff away from their work for long. Business may be lower tempo than combat operations, but it’s always on.

In corporations and large organizations, the training focus is predominantly on individual skills, usually based on some variant of ISD. However, as Jay Cross and I explained in the future of the training department, training is inadequate in developing the emergent practices necessary to operate in complex networked environments. The military is able to get around this weakness through collective training prior to operations, or pulling troops out of the operational theatre for special training. Also, new operating procedures are constantly updated with information from the Lessons Learned Centre.

Civilian organizations have taken one part of the military training model – Individual Training – and applied it to almost all training. This is part of the problem which could be partially addressed by focusing less on formal individual training and supporting informal learning. But the big challenge for businesses is to conduct collective training while working (being operational) at the same time.

Not Group Think, but Think Groups

The reality of working in networks is that the individual is only one node within multiple relationships of varying strengths and value. How the group works together and to whom it connects becomes very important. How then can networked workers do the equivalent of military collective training while still working effectively? 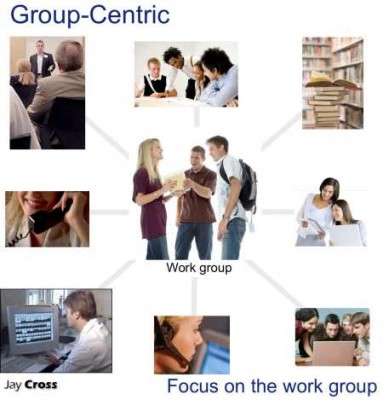 Something like the Lessons Learned Centre could be a good model for a more operationally-focused training department, communicating the emergent patterns that are observed in day to day work. The official objective of the training department could also shift from supporting individuals to supporting groups. This would be a major shift and we might then see a number of changes:

The new training department would have to be focused on “Connecting & Communicating”, such as lessons learned, and I would bet that the first set of tools they would grab would be some kind of social media to enable better communications and networking. 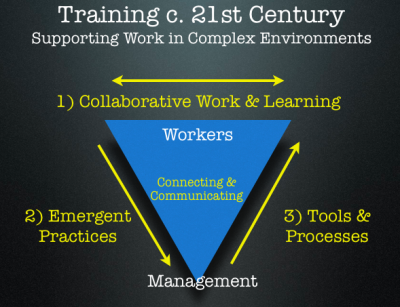 4 Responses to “Group-centric work and training”