As a result of economic changes, some workers are getting left behind, reports the New York Times:

For the last two years, the weak economy has provided an opportunity for employers to do what they would have done anyway: dismiss millions of people — like file clerks, ticket agents and autoworkers — who were displaced by technological advances and international trade.

I’ve said it before and I’ll say it again. I don’t believe that it’s any longer a question of whether standardized work will be outsourced or automated, but when. How much time do we have to prepare people for the new revolution? Any scenario that I consider – peak oil, global warming; globalization; Asian dominance – still requires that the developed world’s workforce deals with more complexity and even chaos. We need to skill-up for emergent and novel practices and that means a completely different mindset toward work. 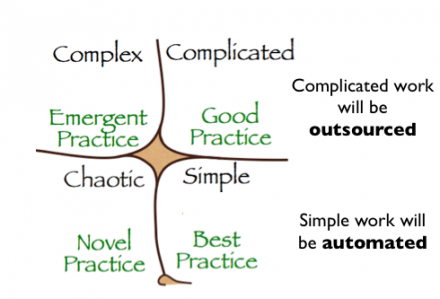 But our schooling and training systems are backward-looking systems, based on what has worked in the past, and don’t help to develop the new skills necessary for the networked workplace. 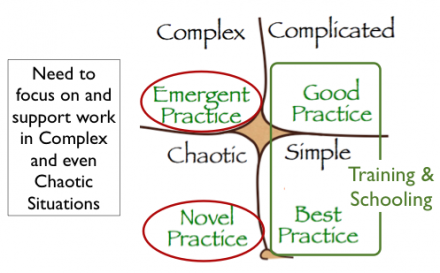 We cannot leave these people behind. As the need for creativity in the workplace increases, organizations must give  serious thought to what work needs to get done and how we can prepare people for it. As Gary Hamel described at the Spigit Customer Summit, traditional (industrial) employee traits of Intellect, Diligence & Obedience are becoming commodities (going to the lowest bidder). The networked, creative economy requires independent and interdependent workers (more like theatre productions) with the following traits that cannot be commoditized:

This brings into question the rationale for practices such as:

7 Responses to “Automated and Outsourced”