We will create the future organization by bringing democracy to the workplace, I wrote last week in How we will manage. The essential factors, in my opinion, for an effective networked workplace (Enterprise 2.0, Social Business, etc.) are not what we have seen in many industrial style companies:

In one of the best blog posts I have ever read, Venkat Rao discusses The Gervais Principle, Or The Office According to “The Office”. The initial premise is Hugh Macleod’s cartoon on the company hierarchy, which often elicits a chuckle when I show it to others [especially since I have it on my business cards]. The entire article is well worth reading. 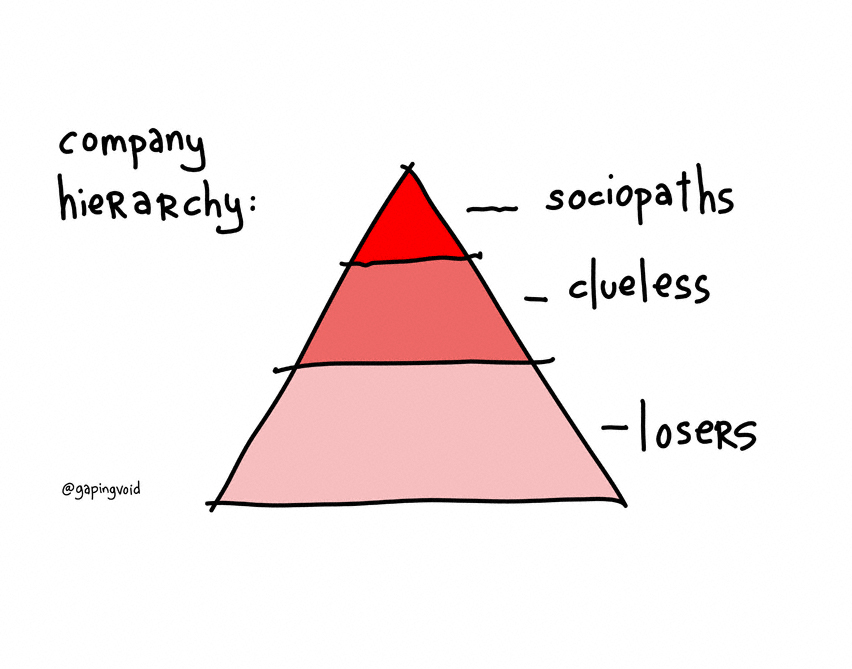 I recently listened to a programme on CBC Radio’s Maritime Magazine on work bullies and it only reinforces the premise that sociopaths run too many organizations. “So why do so many bullies rise to a position of power?” asks Jerry West, the radio host. Here is a reference to the answer given:

In 2005, British psychologists Belinda Board and Katarina Fritzon at the University of Surrey interviewed and gave personality tests to a number of high-level executives. They then compared their profiles with those of criminal psychiatric patients at Broadmoor, the all-male high-security hospital, home to some of England’s most notorious murderers. The researchers found that three out of eleven personality disorders were actually more common in managers than in the disturbed criminals:

And you wonder why I rage against the machine when it comes to hierarchies and institutions? In the CBC programme, a Dalhousie University professor states that in job interviews, no one bothers to look at deviant or counter-productive behaviours. Hiring those who are prone to bullying then leads to a hostile or toxic work environment.  As Jerry West says, “It’s not difficult to find hierarchical work environments that are toxic” and organizations that exhibit this behaviour include Canada’s RCMP.

So what are the options? The programme suggests:

But even these recommendations seem almost futile in many organizations today. While people may be talking about it now, the real challenge is to change our work structures so that it is much more difficult for bullies (sociopaths) to succeed. We need to understand and talk about how our structures shape us.

As Jerry West concludes, “Doing nothing is a choice, too.”

13 Responses to “First we shape our structures, and then the sociopaths take over”

Leave a Reply to Harold Jarche