“When monopolies succeed, the people fail …”, Henry Demarest Lloyd wrote in March 1881, denouncing the practices of Rockefeller’s Standard Oil. Almost a century later, John Kenneth Galbraith warned of the dangers of blindly having faith in our capital market system and the organizations and institutions that support it.

“The greater danger is in the subordination of belief to the needs of the modern industrial system … These are that technology is always good; that economic growth is always good; that firms must always expand; that consumption of goods is the principal source of happiness; that idleness is wicked; and that nothing should interfere with the priority we accord to technology, growth, and increased consumption.” —The Atlantic 1967-06-01

Both Demarest Lloyd and Galbraith saw the flaws in the capitalist system, especially the tendency to think of people as mere replaceable human capital. In 1994, Peter Drucker discussed the rise of the knowledge worker, a term Drucker coined in 1959. This had the potential to shift the focus of our production systems from capital to labour. But Drucker saw that the shift to a society of knowledge workers would not be easy, as we are still struggling with it today.

“It is also the first society in which not everybody does the same work, as was the case when the huge majority were farmers or, as seemed likely only forty or fifty years ago, were going to be machine operators.

Today, we deal with some of the same struggles against monopolies as Demarest Lloyd, but we are several billion more people, facing climate change and environmental degradation. At the same time, our democracies are under attack from the abuse of surveillance technologies by corporations and governments.

The political tide is shifting to embrace tribalism. The change in the human condition identified by Drucker requires new thinking and putting new models in practice. Our existing institutions do not offer these. Our markets, especially our labour markets, are not designed for this change in the human condition. Automation, coupled with non-routine work as the norm, fundamentally changes our concepts of labour and earning a living.

Society is changing in this era of global digital networks. Messages get around the world in minutes. As a result we are more connected to our fellow humans. We talk with people in every part of the world. Young people identify with other young people. Global social movements can quickly appear, and also disappear. Markets and institutions are being replaced by platforms in banking, lodging, transportation, and a growing number of fields.

The platform economy is also a rental economy, where little is owned and the platform capitalists control the rules [Just ask someone who has had their identity taken on Facebook]. As a result of this connectivity, people can identify with those like themselves. Seb Paquet called this “ridiculously easy group-forming”. However, the tendency to tribalism can be strong, and many of us are not prepared for this ‘change in the human condition’. The reversal of the positive aspects of a globally connected world is seeing everything as binary and dealing with complexity like a reality television show. This seems to be the tendency for many people, aided by the (still) market-oriented mass media. The possibility of Canada’s public broadcaster CBC to eliminate advertising may be a step in the right direction to counter this potential McLuhnesque reversal. 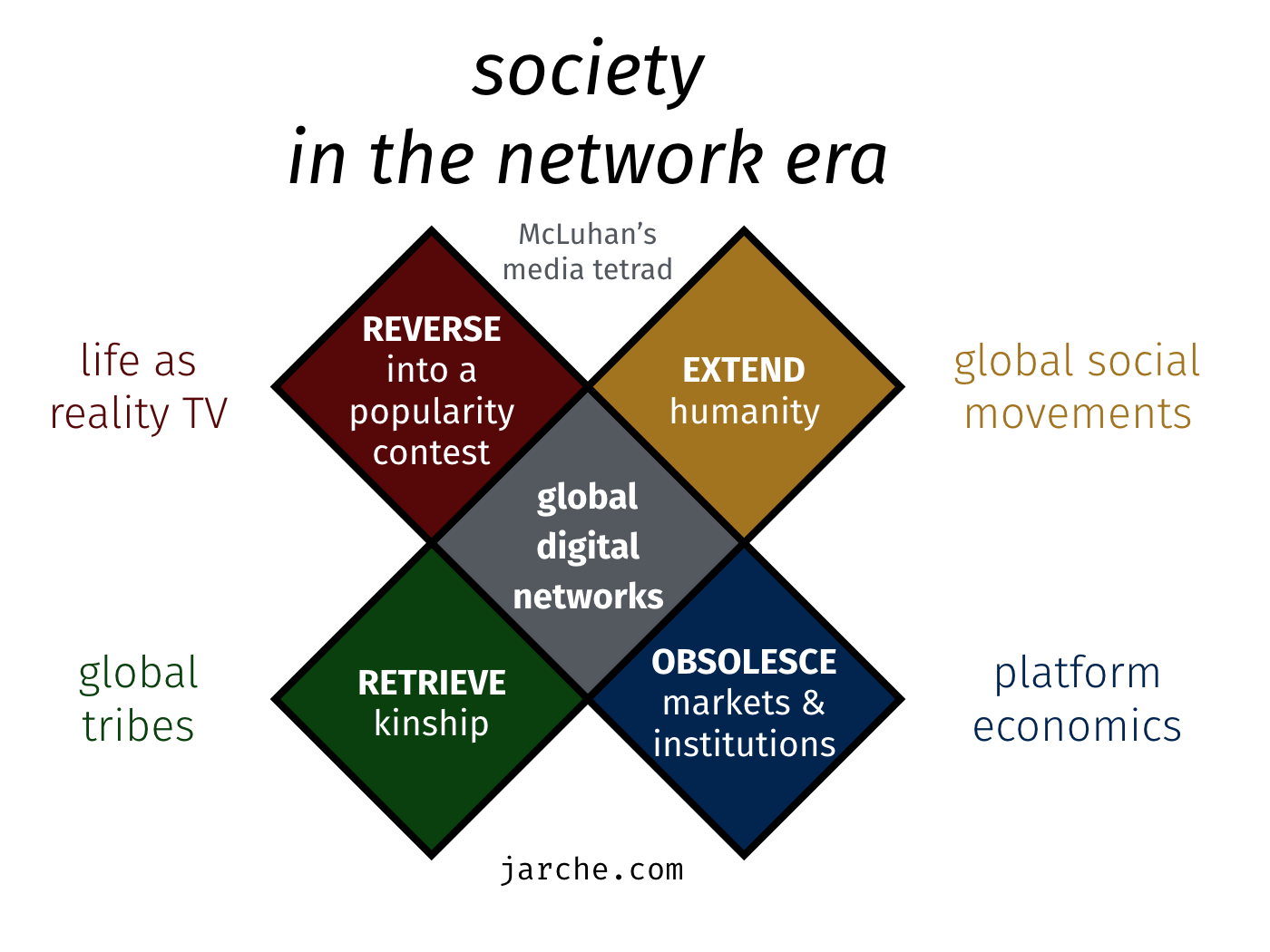 As society goes, so will politics. Social media extend global participation and can be a force for better understanding. But the linear aspects of reasoning, a core part of a print-based society, are easily forgotten as is shown in the almost fatalistic acceptance that we now live in a post-truth era and have to deal with this. Identity politics have been retrieved, so that one is loyal to the group, no matter what the facts. In addition, as these political forces are extended by the internet, we see a potential reversal into tyranny under populist demagogues. 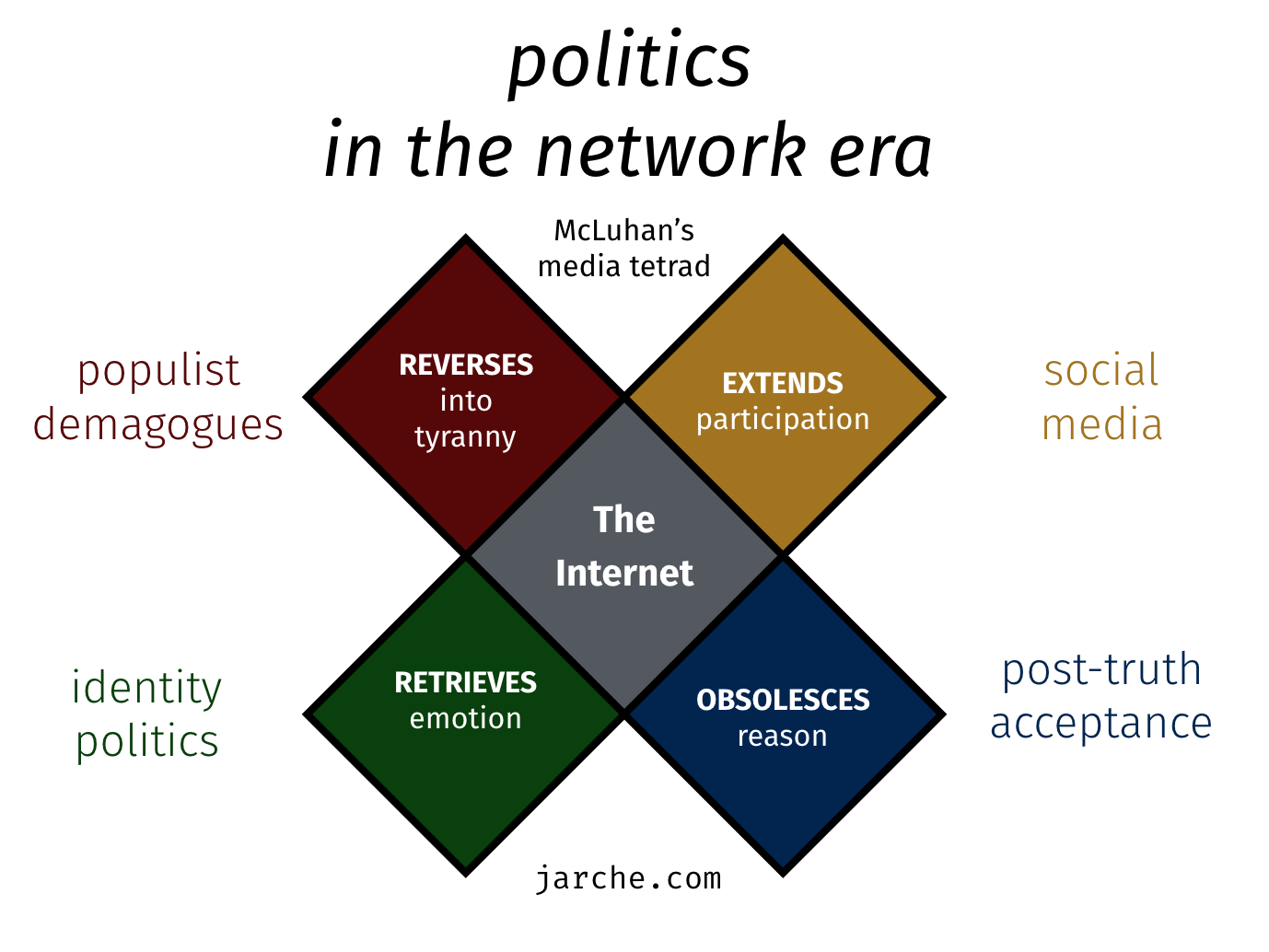 What can we do?

Looking at society and politics through the lens of McLuhan’s Laws of Media can open our minds to the possible ramifications of our collective actions and inaction today. Focusing efforts on the ‘extend’ part of the tetrad may counter the ‘reverse’ tendencies. This means supporting global social movements that promote human values. It could be developing social media literacies so that all citizens can be active and engaged online. Sense-making and media literacy skills are critical for everyone. We have the technology, and perhaps the Will, to do so. We can also start building better models to replace the old ones. Why should we replace market capitalism with its clone, platform capitalism, when platform cooperativism is a better model for humanity? In this world of global digital networks, we can be the media.