A recent research paper — Orthodoxy, illusio, and playing the scientific game — looks at why it took so long for the mainstream medical community to accept that the SARS-CoV-2 virus is predominantly spread as an aerosol and not through surface transmissions.

Three fields—political, state (policy and regulatory), and scientific—were particularly relevant to our analysis. Political and policy actors at international, national, and regional level aligned—predominantly though not invariably—with medical scientific orthodoxy which promoted the droplet theory of transmission and considered aerosol transmission unproven or of doubtful relevance. This dominant scientific sub-field centred around the clinical discipline of infectious disease control, in which leading actors were hospital clinicians aligned with the evidence-based medicine movement. Aerosol scientists—typically, chemists, and engineers—representing the heterodoxy were systematically excluded from key decision-making networks and committees. Dominant discourses defined these scientists’ ideas and methodologies as weak, their empirical findings as untrustworthy or insignificant, and their contributions to debate as unhelpful. —Wellcome Open Research 2021-05-24

By Spring 2020 I had already read several analyses that showed the virus was airborne, yet our public health authorities were ignoring the research and issuing more orders for surface cleaning but no orders for improved ventilation and air filtration. As the above quote from the abstract shows, the unwillingness to learn was from a combination of political interests, established policies, and disciplinary arrogance that blocked the acceptance of findings from outside of their expertise. 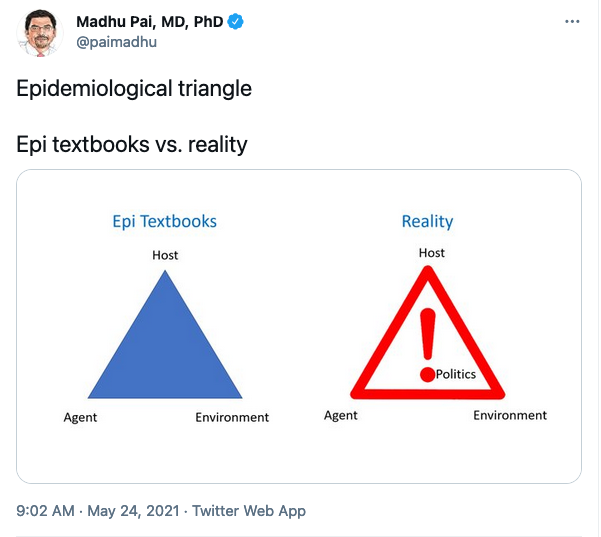 To add to Doctor Pai’s image above, we have to also include ‘silo thinking‘ and ‘not invented here’ mindsets within medicine itself.

I wrote almost a year ago — in Entangled Thinking — that if this pandemic is teaching us anything, it’s that experts disagree, nobody has all the answers, and we are mostly making things up as we go. In a crisis it is important to act but even more important to learn as we take action. Add in the human factor that some people are always trying to take advantage of any situation and we start to float in a liquid surround of misinformation, propaganda, half-truths, and sometimes utter crap of the post-truth machines.

The idea of The Entanglement is that the world has become so complex and interconnected that the individual disciplines developed during The Enlightenment — like medicine — are no longer adequate to help society in our collective sensemaking, especially during global crises.

“Unlike the Enlightenment, where progress was analytic and came from taking things apart, progress in the Age of Entanglement is synthetic and comes from putting things together. Instead of classifying organisms, we construct them. Instead of discovering new worlds, we create them. And our process of creation is very different … As we are becoming more entangled with our technologies, we are also becoming more entangled with each other. The power (physical, political, and social) has shifted from comprehensible hierarchies to less-intelligible networks.” —… Long Live the Entanglement

Experts in all disciplines have to get out of their silos and connect in multidisciplinary subject matter networks. A lone expert, or even a lone discipline, is obsolete in the network era. Only cooperative networks will help us make sense of the complex challenges facing us — climate change, environmental degradation, pandemics, political turmoil, etc. 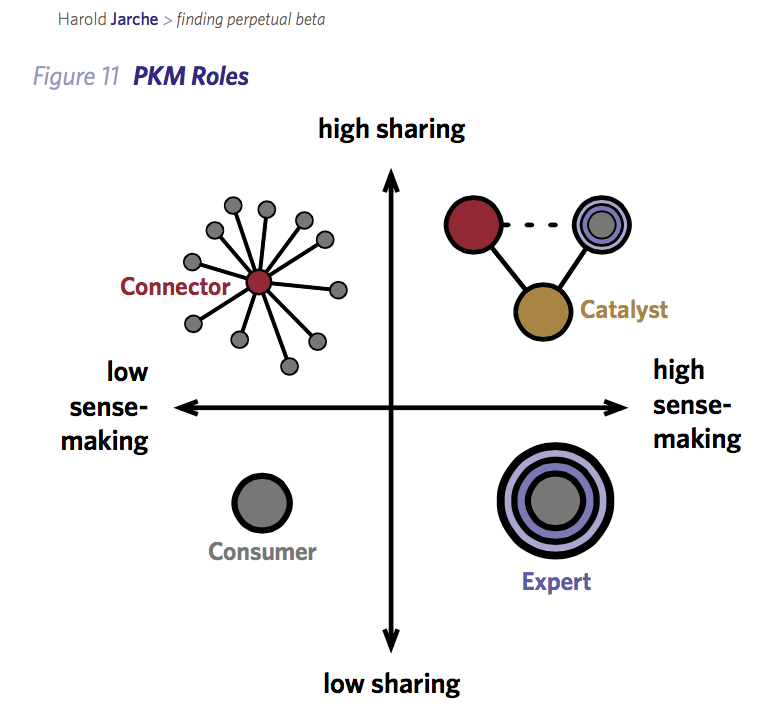 In an entangled world,  experts have to become knowledge catalysts.