Continued from: understanding the shift

To an older culture, a newer one often looks amoral, as morality guides older cultures. To a newer culture, older cultures appear to be primitive, lacking complexity. But each culture has its pros and cons. The challenge in developing what Lene Rachel Andersen calls ‘metamodernity‘ is in taking the positive aspects of previous human cultures in order to create a global culture that can deal with the complexity of technology, climate emergency, and evolving political situations.

The Nordic Bildung perspective of societal evolution aligns with David Ronfeldt’s TIMN Model, which I have discussed in — understanding the shift. Andersen suggests we can build upon the positive aspects of each previous societal form in order to create a metamodern society. We do not need to destroy the old ways.

Post-modern (shift from Markets to Networks) 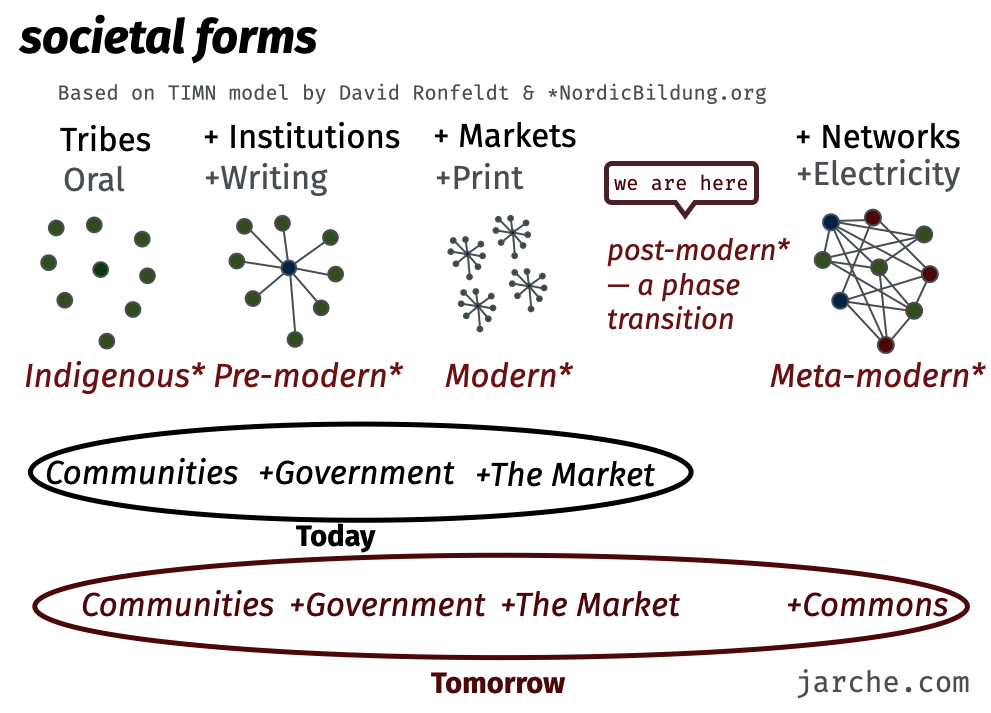 Metamodernity is about “networks of meaning” and “… allows that phenomena can have both absolute and relative meaning and significance.” “Furthermore, metamodernity can allow us to appreciate the entire human experience as a connected whole. It can allow us to seek out different kinds of knowledge in different places for different purposes.”

This approach is similar to Kieran Egan’s cognitive levels and reflects the last of these — Somatic, Mythic, Romantic, Philosophic, and Ironic.

1. Somatic — (before language acquisition) the physical abilities of one’s own body are discovered, as are our emotions; somatic understanding includes the communicating activity that precedes the development of language; as the child grows and learns language, this kind of understanding survives in the way children “model their overall social structure in play”.

3. Romantic — the limits of reality are discovered and rational thinking begins, connected with the development of literacy. Egan connects this stage with the desire to explore the limits of reality, an interest in the transcendent qualities of things, and “engagement with knowledge represented as a product of human emotions and intentions”

4. Philosophic — the discovery of principles which underlie patterns and limits found in data; ordering knowledge into coherent general schemes.

5. Ironic — it involves the “mental flexibility to recognize how inadequately flexible are our minds, and the languages we use, to the world we try to represent in them”; it therefore includes the ability to consider alternative philosophic explanations, and is characterized by a Socratic stance in the world. —The Educated Mind

While we do not need to destroy the old forms, we must also guard against their dark sides. Andersen warns about the pitfalls of each societal form, and we can see examples throughout the world, as we collectively deal with the current shift.

“The test of a first-rate intelligence is the ability to hold two opposed ideas in mind at the same time and still retain the ability to function.” —F. Scott Fitzgerald

The major challenge for a metamodern approach to take hold is in politics, which is deeply rooted in previous societal forms. Andersen concludes that metamodernism has the potential to enable us to clean up the messes we have made and pass on a better world to the next generations.

“If any of this is going to happen, we need to create the educational, Bildung and cultural institutions that allow us to be meaning making at a sufficiently high level of complexity. That anchor is locally, nationally, continentally, and globally. We also need to be at least bilingual so that we can enjoy both deep cultural roots where we grew up and the ability to have deep and rich conversations with people from around the globe. Politics must be about our understanding of the world, and money must be a means to increase our meaning making and expand our symbolic world and our horizon.”

This is why I keep promoting personal knowledge mastery as one method of meaning making in our connected world.